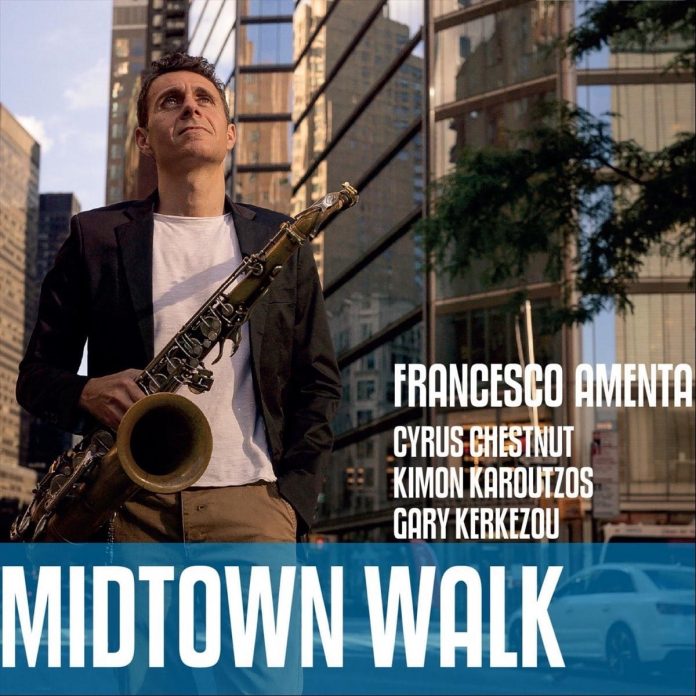 Amenta’s second album as a leader, Midtown Walk, features all new, original compositions aside from a rendition of Duke Ellington’s Come Sunday. Born and raised in Italy, Amenta conveys his impressions of his life now in NYC.

Amenta has great skill as both a saxophonist and a composer. The album begins with Dancing, a track for Amenta’s wife – yes, a dancer. Despite having a limited dance-feel to it, the track has some complex rhythmic qualities. The ending nicely sets up the second track, Home, a favourite of mine. It’s bluesy, with a beautiful intro from pianist Cyrus Chestnut before settling into a funkier groove. Despite its title, Amenta plays of the streets of New York, his new home, as opposed those of ancient Italian cities.

The first quarter of Bunch Of Time is occupied by an impressive solo from Kimon Karfoutzos on bass, setting up rhythmic elements that are then played upon through the remainder of the track. If modalism is your thing, then head for the fourth track, Number 9. Inspired by McCoy Tyner, this track demonstrates Tyner’s ability to play simultaneously in both of John Coltrane’s “chordally (vertically) [and] melodically (horizontally)” directions.

The next track, 06-22, transports the listener to a more pensive place through a slower tempo paired with greater dissonance. The date in the title was that of both Amenta’s first gig as a leader in New York and the day his father died. Perhaps the most varied track is Burgundy 45, which combines traditional styles from New Orleans with blues, swing and other flavours.

With the help of a strong band Amenta has produced something exciting in Midtown Walk. The musicians seem to encourage one another to raise their game. Here’s hoping they bring us more music as a unit.

Leon Nock - 17 March 2021
Kris Kringle had a bad trip this year and didn’t get to my house until 2 January, so late that I’d already reblocked the chimney and he had to...