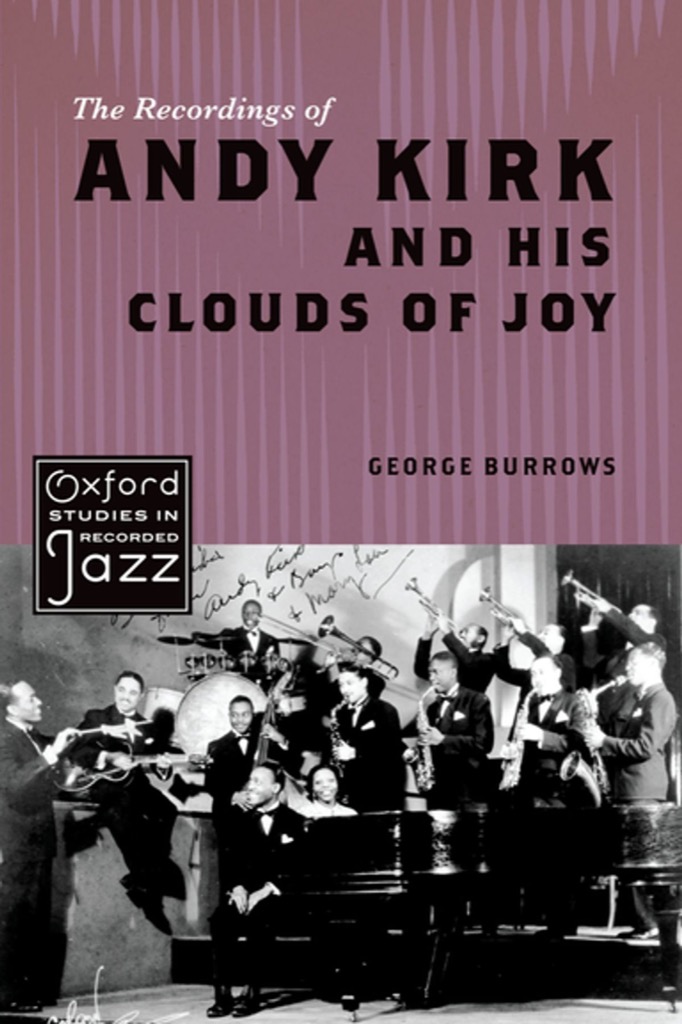 Having grappled with an item from the Listener’s Companion series, I now meet up with the Oxford Studies in Recorded Jazz. Seven titles to date and, unlike the Companion books, they tend to concentrate on a few select recordings. Miles Davis, for instance, is covered by just three years of work in the studio.

George Burrows lets us know early on that he is ‘not concerned with charting the band’s achievements’. His aim is rather to pinpoint the way ‘racial and musical values are intertwined’

On the surface, Andy Kirk gets a more familiar treatment that traces his entire career. The author, though, does things differently. Having an academic background – reader in Performing Arts at the University of Portsmouth – George Burrows lets us know early on that he is “not concerned with charting the band’s achievements”. His aim is rather to pinpoint the way “racial and musical values are intertwined”: put very roughly, he contrasts Kirk’s night-job tendency to produce music suitable for white dancers with efforts made by record producers to make the band appeal to black audiences.

We are all aware record companies used to have ideas about how their bands should sound, a later example from the 50s being Blue Note trying to stop the Jazz Messengers from recording The Preacher. Bands were segregated during the early years of jazz and produced styles one could definitely term black or white. As things got more complex, companies identified musical characteristics that appealed to certain racial groups. As for vocal numbers, black bands generally recorded songs not heavily promoted and/or written by relatively unfamiliar composers.

By the time Kirk started making records, much of this applied but I find the attempts by Burrows to help us identify black or white elements in detail rather confusing. Two words he regularly uses in his text are “racial” and “signifyin(g)”, as they relate to characteristics of various recordings. His favoured villain among commentators on that period seems to be Gunther Schuller, who was not keen on Kirk’s vocal tracks. As a long-standing fan of Jimmie Lunceford’s orchestra, I have no problem with falsetto singers and would not argue with those aficionados who rate Kirk’s Pha Terrell as the best of the bunch.

There’s an account of the song Christopher Columbus, where Burrows shows us the racist cover of the sheet music and refers to lyrics appended to the tune by Andy Razaf. However, the records he analyses, by Fletcher Henderson and Andy Kirk, were just instrumentals based on the Henderson stock arrangement. I go along with him in preferring the Kirk version as being more relaxed, which one might expect from its Kansas City connection. Given the author’s interest in things racial, it’s a shame he did not include the comparable Benny Goodman version; all three were recorded in March 1936, no doubt the result of some determined song-plugging.

Burrows undertook very thorough research that included a spell in Kansas City and access to the papers of Andy Kirk and Mary Lou Williams, among much else. If I find it hard to follow many of the racial comparisons and to give them the importance he thinks they deserve, when he deigns to comment simply on the music his judgement seems solid enough. I would have liked a bit more analysis on Kirk’s tenorman Dick Wilson, who everyone agrees is an underrated soloist. He failed to spot that the Mary Lou Williams tune Walkin’ And Swingin’ contains a few bars of what later became part of Thelonious Monk’s Rhythm-a-ning. Williams had met Monk in the 30s and one assumes this particular passage stuck in his mind though it could, of course, be the other way round. Among the bits where Burrows does deliver is his commentary of the words to Little Joe From Chicago, translated as a dig or two on the subject of the legendary Joe Glaser, Kirk’s manager for a while.

Whether or not one follows the racial sub-plot, the book is recommended to anyone interested in Kirk or in the wider Kansas City scene – lots about Bennie Moten though little about Basie. Burrows goes into some detail about what Kirk did in the 40s, an area not often covered, and includes a discography. It made me listen again to a band not often checked out, an enjoyable experience though rarely one to get the analytical juices flowing. That could explain the attraction of the sub-plot.