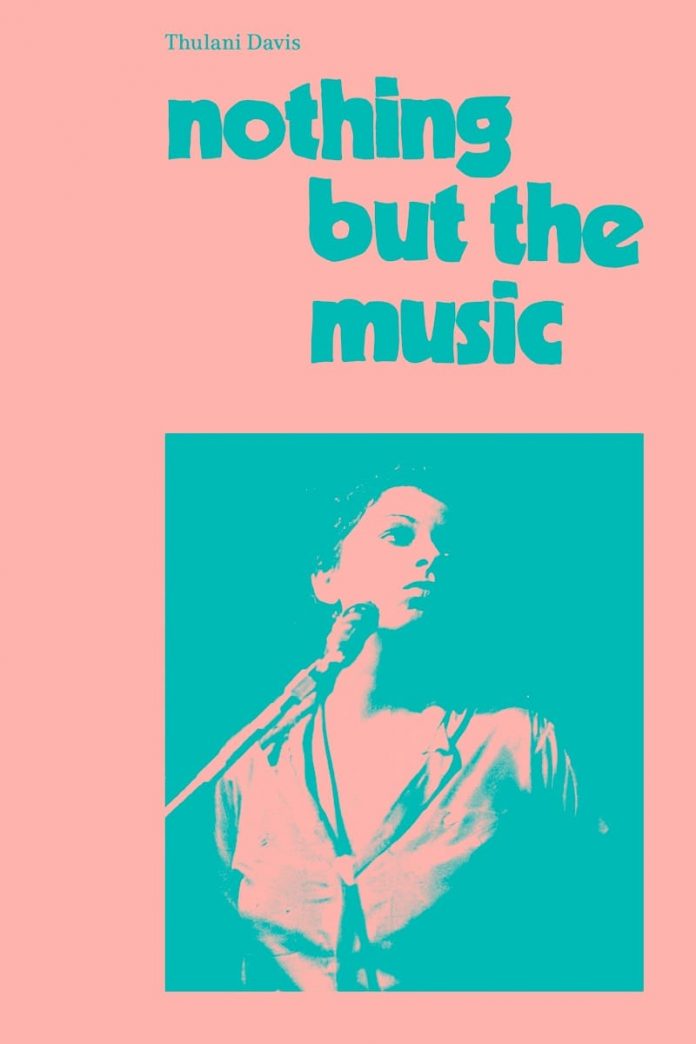 American writer and political activist Thulani Davis wears her poet’s hat for this trawl of her work from 1974 to 1992, which springs from recollections of music and the places where she’s heard it performed, perhaps more than once the “sweaty funky overweight underbuilt joints” referred to in Zoom (The Commodores) and called at during her pursuit of the Philadelphia sound. It was the sort of place “where you could buy to satisfy / any of your senses” and find pink-lit romance while The Coasters, The Temptations and Smokey Robinson lulled you into a genuine sense of security.

Nothing But The Music is thus a reminder that so-called “black music” connotes more than jazz, which – at a Cecil Taylor gig in New York – Davis nonetheless realises she has heard “ever since I can remember.” C.T. At The Five Spot has the performative, Ginsbergian virtues that once elevated jazz and poetry to Jazz & Poetry. A short-lived movement in the UK, it increased sales of Old Peculier, raised the duffle coat to the status of sartorial flair, and tried its best to prove that chalk was not unlike cheese:

And so on, sans punctuation, but with more ampersands to emphasise the urgency of getting it all down. Despite their haste, these are ruminations after and before the event, not jumpin’ lyrics to the music being played, despite their later having been set to music and performed by others: so, both ruminations and accompanying ejaculations.

It’s not long before the music celebrated is lodged in its troubled environment: the Mecca Flats of 1907, for instance, where the poet seeks the go-together instinctual personalities:

It’s a look back at a building erected in Chicago 128 years ago for the World’s Columbian Exposition and later converted into whites-only apartments, then middle-class black ones. Razed in 1952 after an unavailing campaign against urban renewal, it was the subject of a tune, Mecca Flat Blues, by Jimmy Blythe, and a poem, In The Mecca, by the great Gwendolyn Brooks, who delivered goods door-to-door there and got to know the residents. A black community was displaced, hence the sadness and anger, as Mecca became a tenement for the poor. Brooks saw a place where “the garbageman was dignified as any diplomat”. Davis would have approved.

On 5 Compositions Of Roscoe Mitchell, Davis hears the music talking “ like hard times & bent slugs / fast city in ya music / hear it cry fast moanful cries”. But, as in a Henry Threadgill album reminding her of jazz places and music that “keeps us up on who we are” there is strength in community and shared experience, as there must have been in the Mecca. Two strands pull everything together in It’s Time For The Rhythm Revue where at the start they represent counter-attractions: listening and dancing to music or street-protesting against injustice. This is 1992, year of the LA riots that followed the savage beating of a black man, Rodney King, by the LAPD and the acquittal of his attackers. Music and violence, a summation of the black experience, and of a country in which that experience continues to guarantee continuing trouble. You didn’t ask people if they’d seen a town burn “cause baby everybody had”.

Davis’s style is percussive-lyrical and scatter-shot, but never eschews accuracy or detail of description. In T-Monious – a Monk obituary on his death in1982 – she observes that:

“For Ruby, Nellie, Pannonica
Four fingers down one up
Ninths pyramid of course
Hide under his slap-and-fly feet…”

Don’t they ’arf. Then there’s the reality behind the idyll of Lawn Chair On The Sidewalk, as a junkie suns himself under a tree that the poet saved from disease on her Brooklyn street. “…his chair faces the corner / and behind his shades / his eyes seemingly adrift / with the music / are watching for the dope man.” The music is “old time jazz”, though the style essayed in the collection is East Coast avant-garde from the 1970s and 1980s. In the Poetry & Jazz tradition, Stateside variety, many of the poems in Nothing But The Music were performed as musicians played, among them Henry Grimes, David Murray, Dwight Andrews and Kelvyn Bell, to name a few with whom Old Peculier quaffers and former duffle-coat wearers in the UK might be familiar.

Davis submitted the manuscript just before the pandemic took hold. In her acknowledgements, she wishes readers all the live music they can get their hands on. Like her poetry and the music it commemorates, Davis is up to date and ever in a present searingly informed by the past.