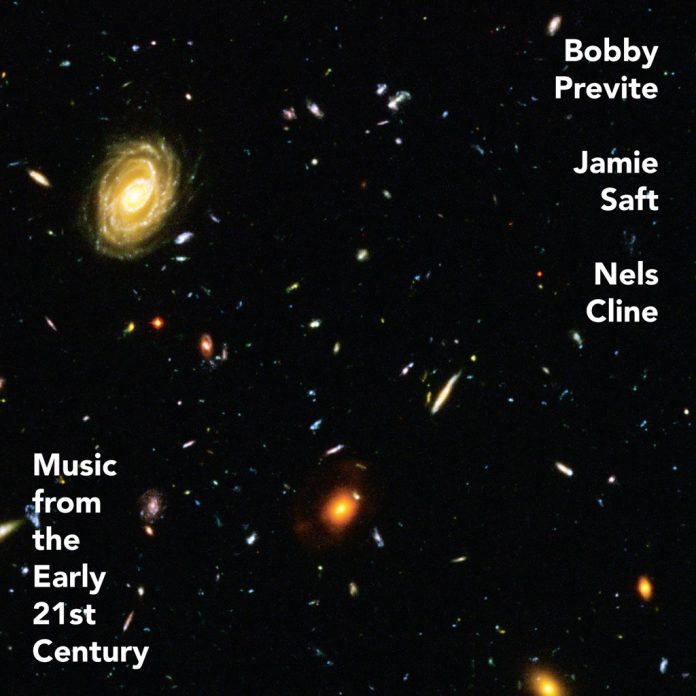 In an early bid for immortality, master improvisers Previte, Saft and Cline have stuck their necks out and attempted to produce the music that will define the early years of this still young century. Coming together in the classic format trio of Hammond organ, guitar and drums, the band grabs music from across multiple genres and styles, taking what they variously need, often within a single tune, to freely improvise these 10 songs, all of which were recorded in a short, four-day club tour of the north-eastern USA.

Song titles are not to be taken too literally or seriously, nor is the music itself. Indeed, Previte concedes that “it would be hilarious if, a hundred years from now, someone Googles – or whatever the equivalent of Google will be then – ‘music from the early 21st entury’, and this record comes up”.

It’s all somewhat of a sonic mishmash, but so too is much of our modern music. Photobomb is a blues thrash with Cline in Carlos Santana mode, Paywall a mix of hard rock and dub, while The Extreme Present is a sort of mutant take on 60s soul and Totes a delightfully wasted psychedelic haze.

At heart, this group prefers to be noise merchants with an intense take on our century’s music, which makes Totes and both the transcendent ecstasy of Woke and the blues vibe of The New Weird all the more enjoyable. In places, I was taken back to 60s blues-rock, echoes of Cream, Emerson Lake & Palmer and all that, or even, thanks to Saft’s Hammond organ, Larry Young’s more outré experiments. Elsewhere I was transported into new universes.

So this is not just a snapshot of now but a reminder that much of what is now is actually quite then. Other groups will define this century’s music differently, but full marks for being first out of the traps.

Nic Jones - 20 May 2019
Cascade is both the most animated track on this album and the one where the feel of everything having been worked out in advance is slightest. As with the rest...