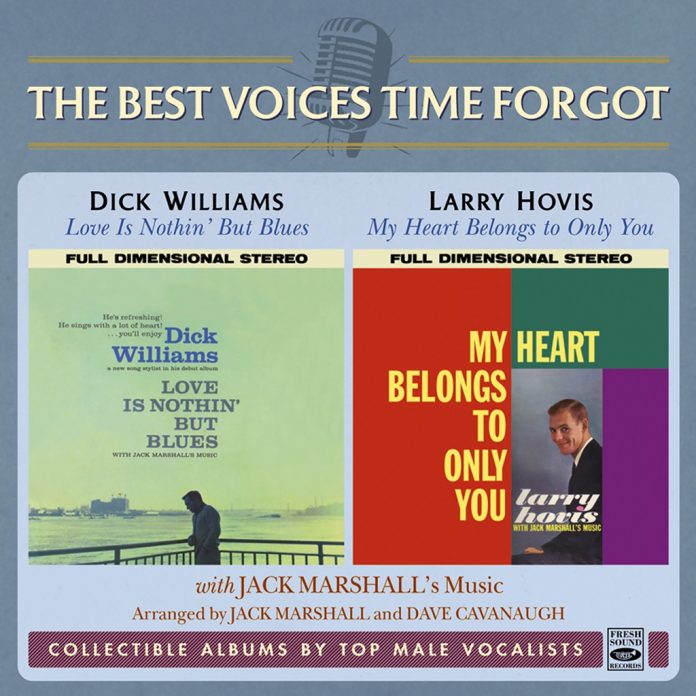 Williams and Hovis, recording respectively in 1960 and 1959, have the benefit of a shouting big band put together and arranged for by the ever-reliable guitarist and producer Jack Marshall who also adds some nice guitar fill-ins. Williams, Andy’s elder brother, has wound up with an attractive sub-Sinatra album. He has a pleasing baritone, and swings immaculately – that’s the word for his 12 tunes here. I’m surprised that he never made it to the upper echelons because he’s every bit as good as his brother. To a jazz listener, the swingers are appealing, whilst the ballads, technically without flaw, moo a bit.

Another Capitol try-out, Hovis confirms that you had to be very good to be issued on the label. His voice is pitched a little higher than Williams’s, and he doesn’t quite have the poise, although he does have the benefit of Jimmy Rowles, Milt Bernhart and Don Fagerquist in Mr Marshall’s orchestra. Conversely the string-laden tracks included are overwhelming and dated.

Issued as part of Fresh Sounds’ The Best Voices Time Forgot series, it’s not jazz, of course. Williams has more for the jazz listener than Hovis does. No wonder he didn’t give up the bread. But Milt Bernhart shimmers on Just In Time and he and Fagerquist break out on S’posin’. The latter, mute akimbo, is well-featured on Exactly Like You.

Brian Morton - 18 March 2020
I once characterised the Wolf as a combination of Irish romanticism and Swiss clockmaker technique (that’s where he lives) and the description, which I feared he might find belittling,...