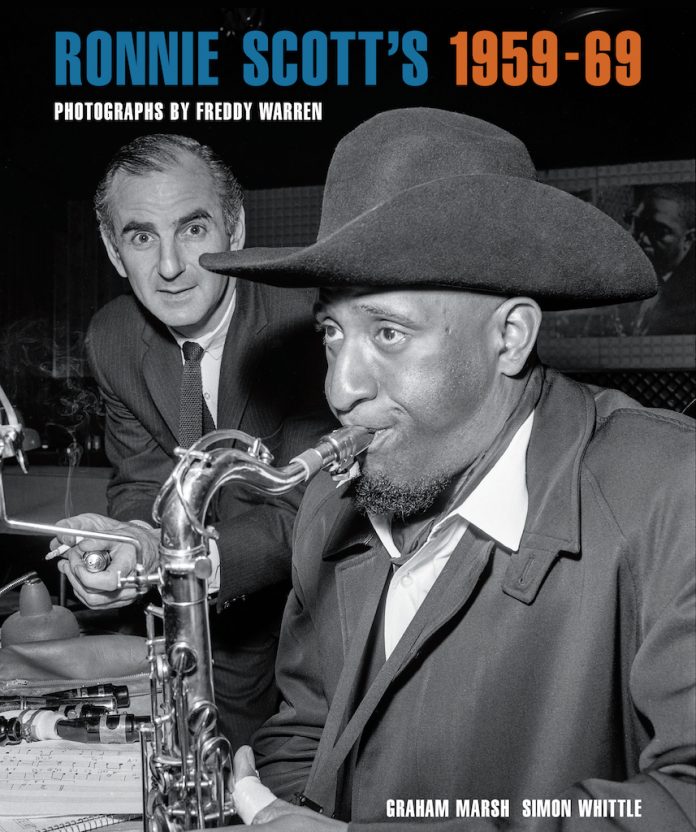 Facing a photograph of the saxophonist at the time of his most podgy and physically unattractive period is a quote from Ronnie Scott: “Stan Getz! Stan Getz had the most voluptuous sound of any tenor player that ever lived, silky and strong, totally mesmeric. He was without doubt the most unpleasant and disagreeable person who ever played at Ronnie Scott’s. Everyone loathed him”.

Am I imagining it, or, when the covers part, does that aroma, redolent of the peculiar cooking at the club, come seeping out?

Of Ronnie’s favourite tenor player and the biggest influence on his playing – Hank Mobley – there is neither picture nor mention. In the category of “not a lot of people know that” is the fact that Hank held a similar place in the affections of Ronnie’s pal Tubby Hayes.

Ronnie Scott’s was even more of a jazz icon than the Savoy Ballroom or the Eddie Condon Club.

Mr Warren was indeed a remarkable photographer, possessed of a formidable technical ability and a great imagination for the settings of his shots.

As ever Ronnie himself looks slightly embarrassed in each of the pictures of him, as though he has no right to such attention. As we learned late on, he was very insecure – a common weakness amongst those possessed of an outstanding sense of humour.

But Freddy Warren was not concerned with such depths, and the physical representations and also their settings are captured with an incisive accuracy that doesn’t so much bring his subjects to life as give them a profound immortality.

Mr Warren died in a fire which burned down his home in 2010. His nephew, Simon Whittle, who had accompanied him on many of his visits to Ronnie’s, was able to reclaim thousands of his portraits from the wreckage, but many, many more were lost.

Fortunately there were enough of the jazz ones (his own favourite was a picture taken from a nearby crane of Clement Attlee relaxing on a deck chair in the back garden of 10 Downing Street) to make up this substantial volume (9” x 10” if you’re old fashioned like me).

To my delight there is a double-page spread showing Yusef Lateef wailing on one page, whilst on the other are a desperately bored Sinclair Traill, founder of this magazine, and his wife Mips. They appear again in a double-page spread a few pages later, watching Salena Jones and Stan Tracey. Knowing Sinclair they must have persuaded manager Pete King to let them in for nothing. That was a very hard feat to accomplish, as I found out myself on the many occasions that I followed that route.

For people like me who were there occasionally, this is a powerfully evocative souvenir and I suspect that unlike most photo compilations, whipped through once and then put away, this is one I will go back to often. Am I imagining it, or, when the covers part, does that aroma, redolent of the peculiar cooking at the club, come seeping out?

The reproduction of Freddy Warren’s work has been achieved with razor-sharp accuracy, which wouldn’t have been possible had not the originals been so good. An outstanding collection amongst photo albums.

Michael Tucker - 13 December 2019
A welcome pairing of two durable and delightful albums featuring Coltrane as he acquired ever greater authority in the mid-to-late 1950s. But this release is not all about Coltrane,...