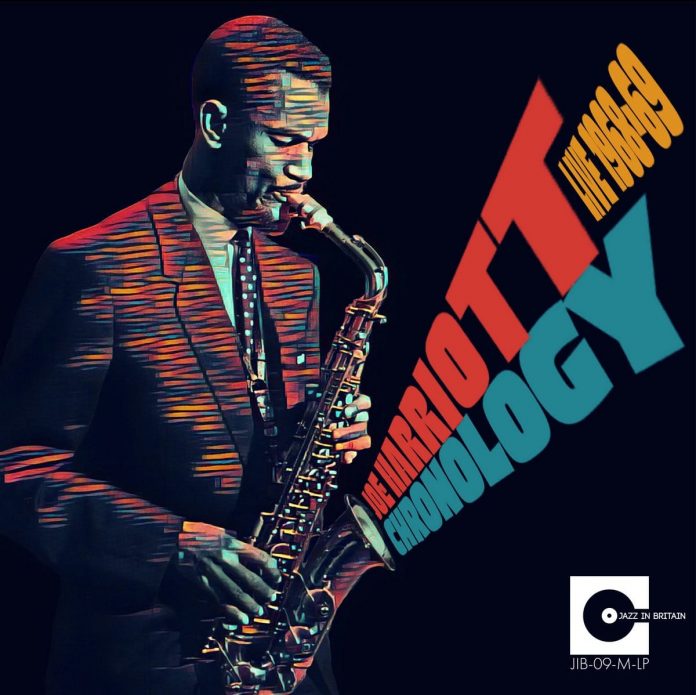 Another excellent archive release from Jazz In Britain, with thanks due to Ron Mathewson and Spike Wells for access to the tapes, taken from BBC’s Jazz Club. Harriott is on top form, in front of a live audience, which adds to the atmosphere of this first-rate recording.

The quintet tracks start with a typical piece of 60s jazz-pop, Harriott’s strident alto soaring above the rhythm section, but it’s Down And Out which is more satisfying, a slow soul-tinged blues, and WSIMC (Who’s Standing In My Corner) with fine, clearly articulated straight-ahead solos from the leader and composer Kenny Wheeler.

Shadows is a freer piece, going back to Harriott’s earlier work, when his association with pianist Pat Smythe started, in the time when they played on Free Form and Abstract. Carved up, fragmented, it alternates periods of stormy interaction with calms and lulls. Harriott described Shadows as “one of the most revolutionary things I have done in terms of jazz… (it) escapes from the limitations of the rhythmic pulse”. Chronology has a more formal approach, stop-start statements followed by extended solos, everyone given an opportunity. The chemistry between Harriott and Smythe is apparent throughout.

Of the two Harry South Big Band tracks, Themeology has a tight, exciting arrangement and strong, explosive solos, driven by a powerful rhythm section, and reminiscent of the Gil Fuller band that was so popular in the US a few years before. Gershwin’s My Man’s Gone Now sees Harriott as a lost soul crying out in the night, with Spike Wells’ rolling and rumbling drums outstanding in the thickly textured support from the band. Changes of tempo are led by the trumpet section, then all the stops are pulled out in the tumultuous coda. Stirring stuff.

This is Harriott at his best – flying with abandon, lively and explosive then considered, thoughtful and inventive. Thankfully the days when he was the forgotten man of British jazz have long since gone. Highly recommended.

John White - 21 February 2020
Card-carrying Vaughanistas will generally applaud this three-CD package of Columbia recordings which include her 11 Billboard Top 30 hits. Sassy-Puritans will pale at many of the string-laden and banal...