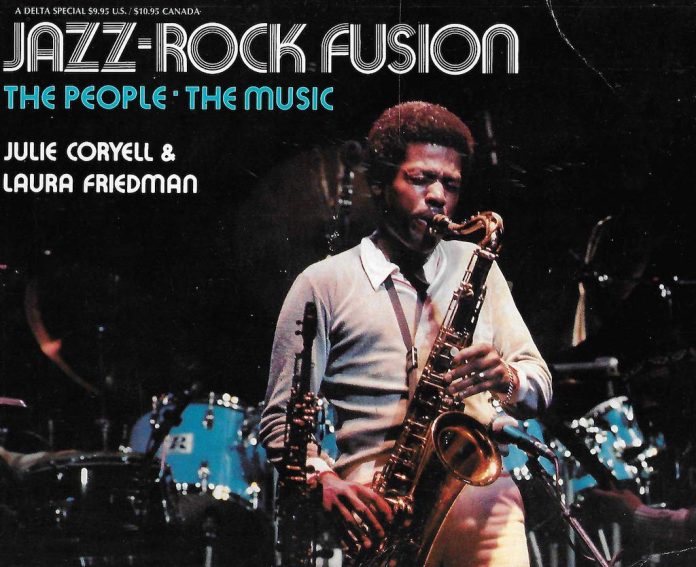 With jazz-rock, also known as fusion music, now such a popular and commercially viable prospect — for both musicians and record companies — it must come as no surprise that someone has compiled a book devoted solely to this most lucrative branch of the jazz spectrum. Authoress Julie Coryell is the wife of Larry Coryell whose electric group “The Eleventh House” has produced some of the worst jazz-rock excesses in recent years. That said, it has always seemed ironic that whilst critics continually denounce fusion music as “teeny-bopper jazz”, groups such as Weather Report constantly come top of many jazz critics polls in reputable magazines. This book does nothing to clarify the paradox.

It is not scholarly, nor is it an in depth study of the music. It is but a series of short interviews with sixty-five “stars” of the movement, including several players outside the fusion field; Keith Jarrett, Ron Carter, Ralph Towner and Freddie Hubbard. These interviews are accompanied by many lavish colour and monochrome photos by Laura Friedman, with a discography of each of the featured artists. The players are all American (including several studio players of questionable artistic merit) or “Americanised” Europeans (McLaughlin, Ponty, Zawinul and others.) Thus many fine players from Europe are excluded, Eberhard Weber and Terje Rypdal to name but two.

The brevity of the interviews prevents any real character conveyance, let alone musical perception. Idle chit chat is too often prevalent, with biographical trivia and the occasional pseudo-philosophical jabbering about life and art. On the other hand there are some delectable quotes, most notably from the ever controversial Miles Davis.

In effect the book is a pleasant undemanding read, with its illustrious presentation and layout, impressive glossy photos and predominantly lightweight conversations. One can only advise to look elsewhere for an in-depth study of the fusion phenomenen (e.g. M. Gridley’s “Jazz Styles”), for this is not a book of insight, nor a major contribution to jazz theory. It’s like an album; geared for fans, to sell copies to an ever growing market for the product. At £6.95 it is not excessively pricey however, and it would sit nicely on your coffee table.
Matthew Bateson

Barry Witherden - 02 October 2020
Eriksen’s trio has been going since 2007 with the same personnel and has maintained a distinctive personality through the intervening years. This is their first basic trio album since...