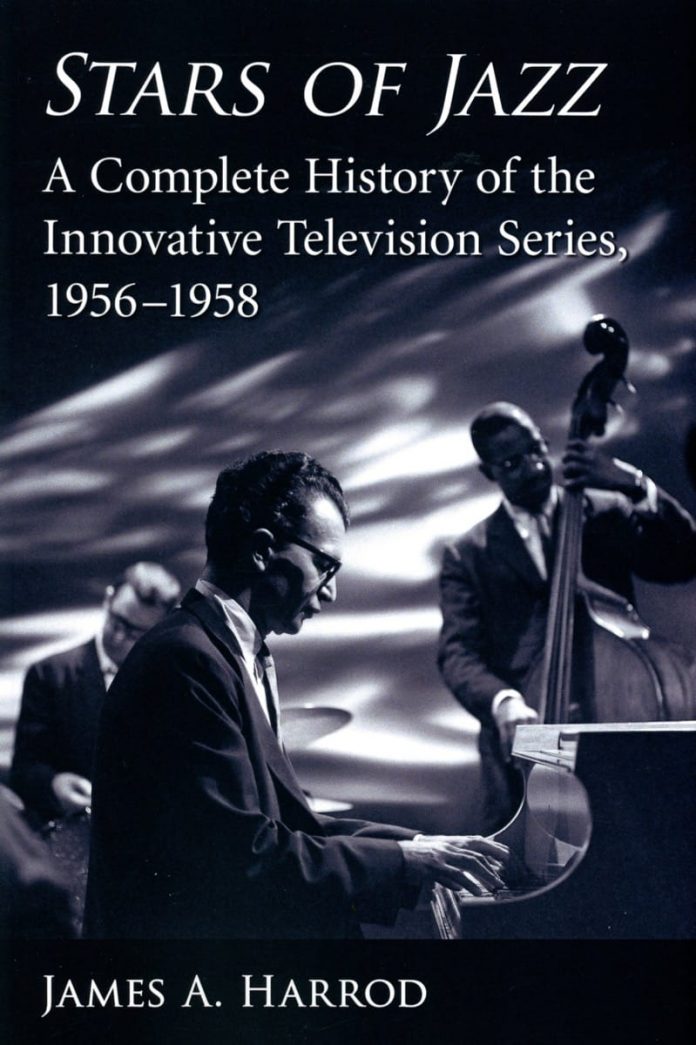 The first Stars Of Jazz broadcast took place on Monday 25 June 1956 at 10.30 pm and it featured the Stan Getz Quartet and Kid Ory’s Creole Jazz Band. It followed the Lawrence Welk Show and that was its regular time-slot for the duration of the series which was seen locally in Los Angeles on Channel 7 on the KABC network.

The show, which was sponsored by Budweiser, was eventually broadcast coast-to-coast for the final 29 programmes of the series. Stars Of Jazz, with its innovative camera work and fresh production values received an Emmy from the Academy of Television Arts and Sciences, together with a Downbeat award as well as recognition from Theme magazine, TV Radio Life, TV Radio Mirror and TV Guide.

It benefited from appointing the multi-talented Bobby Troup as its host and his laid-back but informed delivery probably helped relax musicians on what was a live TV show. He was a consummate performer and was clearly at home in a television environment, having worked on the NBC Musical Chairs quiz show with Johnny Mercer, Stan Freberg, Mel Blanc and Peggy King.

Others who had auditioned for the role included Leonard Feather, Les Koenig, Dick Bock, Howard Rumsey, Sleepy Stein, Gene Norman, Stan Kenton and John Tynan. Whenever Troop was unavailable Johnny Green, Johnny Mercer, Mel Tormé, André Previn or Jerry Colonna stood in for him. On one occasion the Bobby Troup quintet with Bob Enevoldsen on trombone and tenor were the featured guest stars and that show was hosted by Stan Kenton.

This fascinating book is the product of more than 20 years research by the author Jim Harrod who is a member of the Association for Recorded Sound Collections, the Jazz Journalists Association and the Los Angeles Jazz Institute. He has adopted an almost forensic attention to detail in accessing AFM contracts to identify every Stars Of Jazz performer. Complete personnels and repertoire including composer and lyricist where appropriate are listed for all 130 shows. Biographical details of the major performers are also included and his research has been helped by Jimmie Baker’s scripts which were available at the Los Angeles Jazz Institute. The book includes many previously unpublished photographs by the celebrated Ray Avery, who attended most of the shows.

The OGJB Quartet has been with us since 2015 featuring four musicians associated with and dedicated to improvisation at the sharp end. In the...

The life of Charlie Watts is, like those of the other members of the Rolling Stones, well documented. But there was the side of...

I first saw Paul Ryan live on stage in the last decade of the 20th century. If not quite the quarter of a century...

This is a brilliant study of the whole of jazz, told through the medium of analyses of the work of some of its greatest...