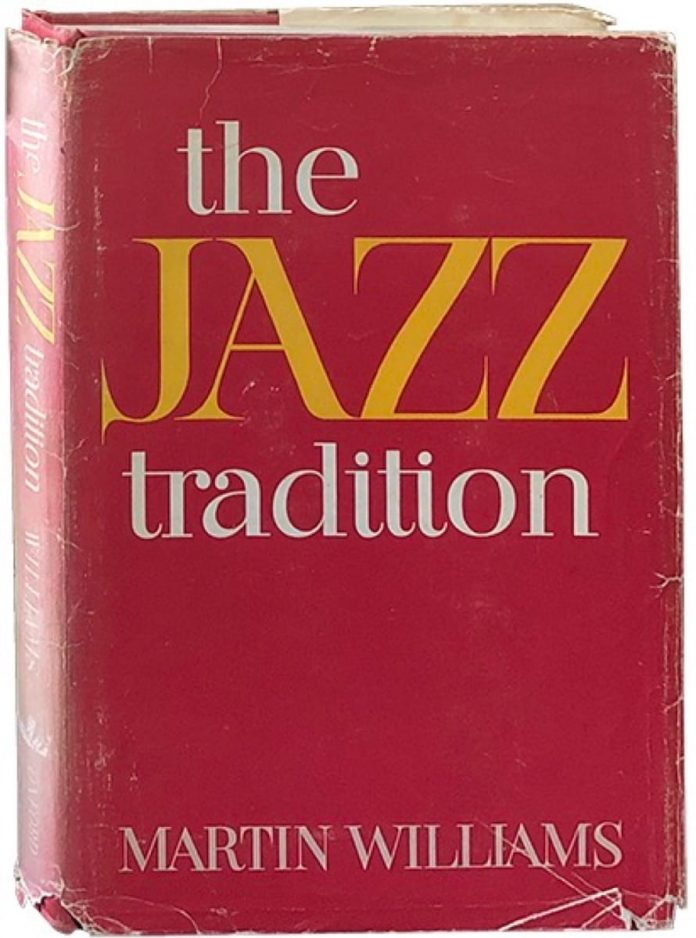 This is a brilliant study of the whole of jazz, told through the medium of analyses of the work of some of its greatest figures, assessing the ‘contributions of an innovative, intuitive improviser (Armstrong, Parker), who reassessed the music’s past, and gave it a new vocabulary, or at least reassessed its old one’ and those of ‘a composer (Ellington, Monk), who gave the music a synthesis and larger form’.

So, within this framework, linking the whole to a rhythmic view of jazz history, Williams proceeds to say fresh illuminating things about each of the musicians he’s chosen. The book is deeply analytical, and in such a way that it can’t be recommended as an introductory work and is out of the question for newcomers; in some cases in fact, one can’t draw much from a chapter unless one owns the relevant records – his examination of Sonny Rollins’ Blues For Philly Joe is a case in point. Here, Williams uses ‘the letter A to indicate Rollins’ main theme, A plus a numeral to indicate thematic variations, and other letters to indicate varia­tions that are not thematic’ and manages to enumerate (and evaluate) no less than fifteen sections of the performance. I feel I could get infinitely more out of this chapter if I possessed Blues For Philly Joe; since I don’t, a lot of it is lost on me, and this is perhaps a small flaw in the book, that it can’t always stand completely on its own.

However, in many cases, he makes slightly more general statements which can’t fail to enrich the listener’s appreciation of a speci­fic musician if they’re prepared to dig out their old records and listen in the light of Williams’ comments. For myself, I’ve been able to replay my Monk records with the fascination I might feel if I’d owned them for a few days rather than several years. Let one example suffice – his assessment of Monk’s compositions as jazz com­positions rather than ‘tunes’ or ‘songs’. Also worthy of note is his assessment of John Lewis’ failures in the Third Stream as the ‘short­coming of something ventured’; his recognition of Miles Davis’ constantly developing talent as ‘unusual, virtually unique, in a music where many instrumentalists have been able to sustain and refine the achievements of their twenties and early thirties, but few have been able to go beyond them’; and his concluding remarks on Horace Silver: ‘Certainly jazz would languish without its Armstrongs and its Parkers to renew its language, and without its Mortons, Elling­tons and Monks to give its compositional syn­thesis. But without individual, creative crafts­men like Horace Silver among its soloists and composers, there might be no common language to renew, and no affirmation of what can be synthesised.’

It’s a measure of the book’s strength that I’ve been unable to avoid quoting its exact words time and again, and I must end the same way, quoting from Williams’ view of the philosophical implications of the music: ‘The Greeks … made the mistake of assuming that since man is the unique thinking animal … his thinking function is his superior function … And tradi­tionally, Western man has accepted this view of himself. But to a jazz musician, thought and feeling, reflection and emotion, come together uniquely, and resolve in the act of doing.’ And again, following Williams’ indication of the ‘high degree of individuality, together with the mutual respect and cooperation required in a jazz ensemble’: ‘It is as if jazz were saying to us that not only is far greater individuality possible to man than he has so far allowed himself, but that such individuality far from being a threat to a cooperative social structure, can actually enhance society.’

I hope the foregoing has given some indication that I think this the best book on jazz I’ve ever read.

Betsy Bell - 14 March 2021
The album title, Da Fé, which translates to “of faith,” references the phrase used to describe the burning of heretics during the Spanish Inquisition, “auto da fé”. Saxophonist and...

Jazz Journal - 24 October 2020
I love this band. During the Cambridge Jazz Festival in August, an excellent three days of joyful sound, I sat right in front of them and had as much...