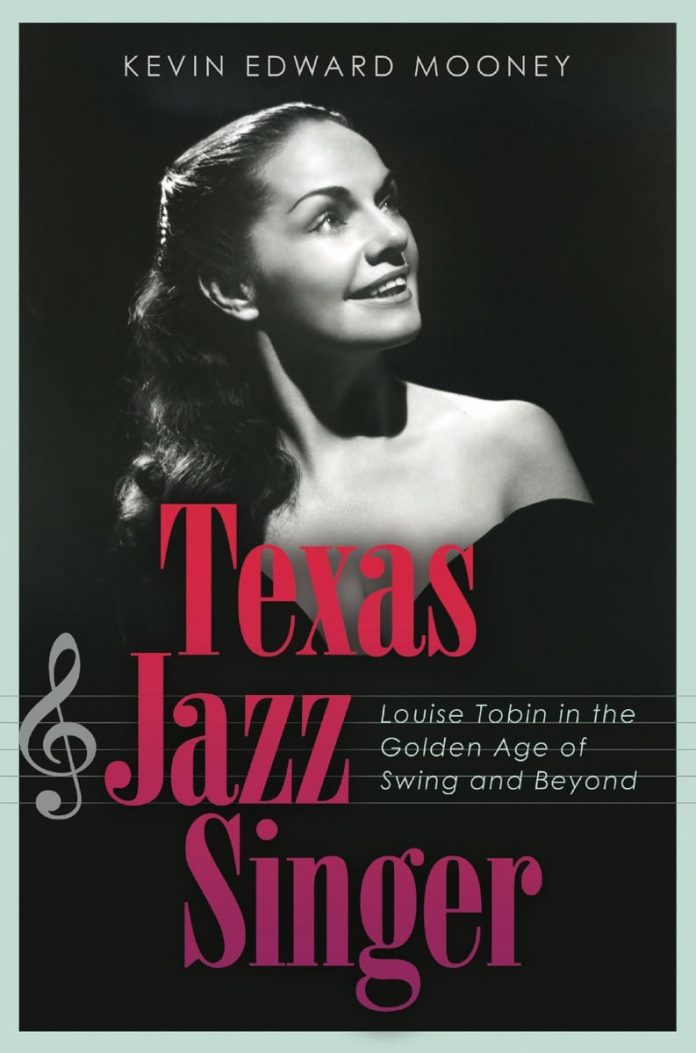 One of the most jazz-oriented and blues-inflected singers of the swing era, Louise Tobin does not come immediately to mind when reflecting on those years. Although unfair, this is understandable as her peak years coincided with significant musical changes and preceded cultural and social change that adversely impacted her life. Among the ways in which her singing career was affected by the social mores of the day was the belief that a woman’s place was in the home, not touring the country with bands.

In this extensively researched book, Kevin Mooney draws on newspaper and magazine accounts of the day and on several long interviews he conducted with Tobin in the 2000s.

Born in Aubrey, Texas on 11 November 1918, Mary Louise Tobin sang from very early childhood. Appearing at talent shows, she attracted favourable attention and at the age of 15 joined the Art Hicks band (succeeding Lee Morse), which is where she met trumpeter Harry James. They began a relationship and, lying about her age in order to get a licence, they were married in May 1935. Soon, her new husband’s career rocketed, thanks initially to his place in Benny Goodman’s trumpet section and later with his own hugely successful big band.

Tobin, too, sang with Goodman, following the departure of Martha Tilton. This was in 1939, soon after James had left to form his own band and he appears to have disapproved of her career. At the time, Goodman was dabbling in modern music largely through the arrangements of Eddie Sauter. Although Tobin’s musical skills allowed her to comfortably accommodate these departures, melodically there was little for her to make a significant mark.

Meanwhile, James was demonstrating that the rules for men were not the same as those for women and had become a serial philanderer. In 1943, they were divorced, leaving her with two sons to care for.

After Goodman, she sang with several bands, mostly small groups, made some records and appeared often on bandstands with Michael “Peanuts” Hucko. Soon, they were married and continued performing together at clubs, concert halls and festivals in the USA and Europe, including the UK in 1991. Several of these performances were recorded and it is clear from these that she retained her musical abilities through the decades.

As an example of Tobin’s skills, when she first joined Goodman, she thought that it was for an audition but learned that it was to be a live radio broadcast on which he expected her to sing without rehearsal and called for a standard blues accompaniment. She promptly improvised lyrics for what became Louise Tobin’s Blues. From then on this was a standard of her repertoire, and as is apparent from later recordings, she improvised lyrics to suit each occasion.

Drawing on the interviews he conducted, Mooney often quotes Tobin and it is clear from her words and tone that she is intelligent, thoughtful and bears no ill will toward those whose words and actions were less than helpful to her career, as well as the deep feelings of attachment to Hucko, who remained her husband until his death in 2003.

The main text of this book runs to 128 pages. The remaining pages contain a discography (listing her Camel Caravan radio shows with Goodman, several of which may be available on YouTube), extensive notes that detail Mooney’s sources, numerous photographs (many of which appear to be snapshots taken by friends and hence perhaps are hitherto unseen) and a full index.

This book will be of interest not only to fans of the swing era but also to those interested in the changes that have taken place in the musical, cultural and social worlds during the long life of Louise Tobin, who is still with us and on Armistice Day 2021 will celebrate her 103rd birthday.

Mark Youll - 17 March 2022
At 82, the American pianist Bob James has enjoyed a diverse musical journey that's driven him from 60s modern jazz to 70s funk, hip-hop, bebop and beyond. His career...