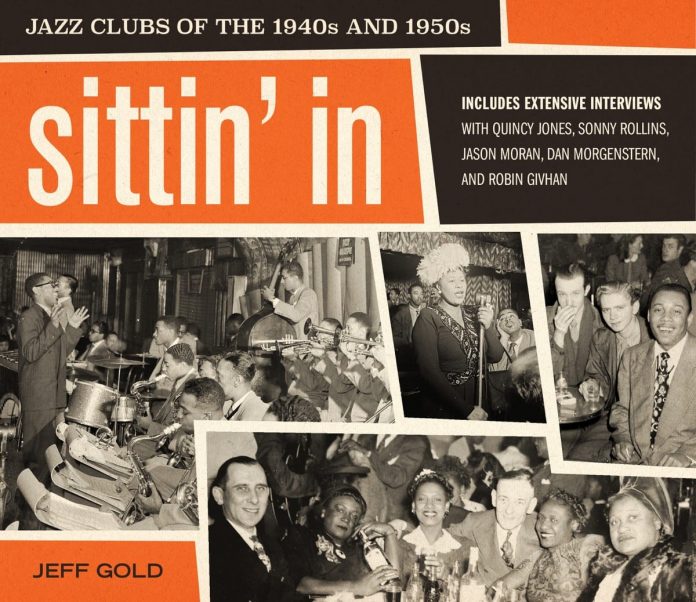 This is a handsomely produced, sturdily made book with the unusual dimensions of eight inches high by nine and a half wide. Its genesis was the purchase by Jeff Gold of a collection of over 200 photos of audience members in jazz clubs. (These were taken by club photographers as souvenirs for purchase by the clients.)

A few include famous musicians (such as Ellington, Parker and others), who were persuaded to pose with a group of admirers, but most photos do not and their significance is historical, sociological and sartorial. The clubs at which they were taken were identifiable, hence the basic structure of the book provides associated pictures and notes for over 60 clubs situated in 10 different cities. The information in the notes is occasionally sparse but frequently extensive and very interesting.

Besides the photos of the customers there are plentiful memorabilia, such as advertisements and announcements of events, often in colour and sometimes of considerable artistic merit. In appropriate places previously published photos, some quite familiar, show well-known musicians in action within the clubs or posing outside them.

Very famous clubs such as the Cotton Club, the Village Vanguard and the Blue Note are here with less famous ones such as El Grotto and obscure ones such as Gilmore’s Chez Paree, which is one of only two Kansas City clubs included. New York on the other hand was the location for around half of the clubs and therefore takes up 80 pages to Kansas City’s four.

So far, so good and Jeff Gold might well have thought these contents made his unusual tribute to jazz clubs complete. Fortunately, however, he decided to supplement them with five interviews (conducted by himself) which take up about a fifth of the book’s pages. The shortest is with Quincy Jones who recalls clubs in Seattle, where he played as a young man, and other clubs experienced when he moved to New York.

Sonny Rollins is more expansive and more interesting and he’s articulate and perceptive about his experiences of playing in clubs and relationships with the audiences. The discussion with a younger musician, pianist Jason Moran, is more philosophical and interesting in a different way, while Dan Morgenstern gives a well-remembered, valuable perspective as a frequent visitor to many of these clubs and a writer about the music heard there. His first-hand memories of 52nd Street and his awareness of the complexities of contemporary race relations are invaluable.

The final interview is with Robin Givhan, who’s known as a writer about the relationship between culture and fashion. She has plenty to say about the clothes of the people in the club photos and the significance of different kinds of hat (which is why I mentioned “sartorial” significance earlier). This one is more of a conversation than an interview and causes me to praise Jeff Gold for his sensitive contributions to all five interviews as well as his masterminding of the project this unique book completes. Though obviously not essential reading for enthusiasts focused primarily on the music, it will surely appeal to anyone with an extensive collection of books related to jazz.

Derek Ansell - 02 April 2021
What is it that made this session the single most famous and attractive album of the Messengers? I think it boils down to the creative compatibility of these five...