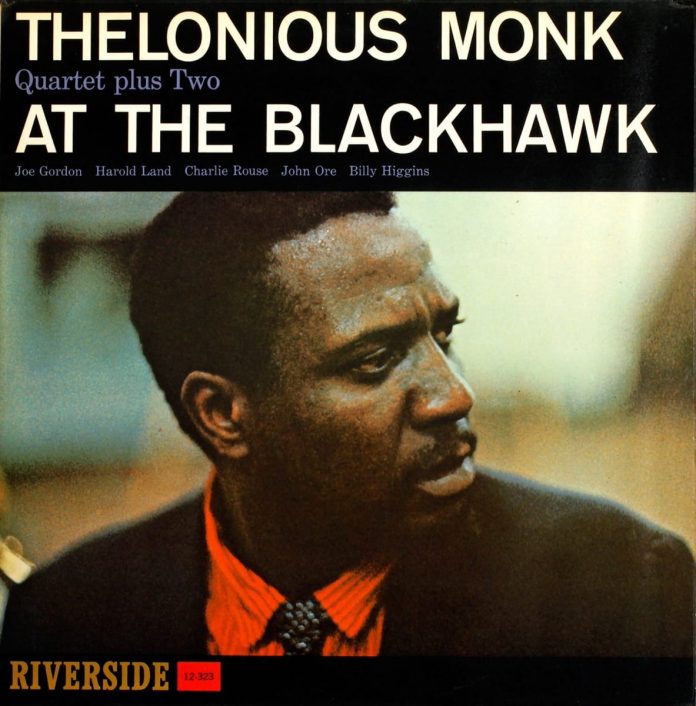 These tracks were recorded just a year ago at that haven of jazz in San Francis­co, the Blackhawk. They feature the cur­rent Monk quartet plus trumpeter Joe Gordon and tenorman Harold Land. It is pleasing to me to be able to say that every track of this LP comes off, with its implication that Monk’s consistency of performance is on the upgrade.

The session catches Thelonious in his most swinging mood, and excitement prevails throughout. The opener is one of his early pieces, which has an insistent quality in its theme, providing wonderful scope for improvisation. Another “oldie” is “Four In One”, one of his weirdest and most angular themes in the bop idiom. Here the two tenor horns, Rouse and Land, state the theme in unison, with Rouse breaking ground in the first solo. Note particularly that favourite rising phrase of Monk’s, which he uses constantly in his backing to the solos on this track. “Sentimental” is a much more powerful version than the piano solo he played on an earlier River­side album, and he is helped enormously in this piece by the solo horns.

Perhaps the tour-de-force is his new contribution, “Worry Later”, with its provocative and appealing, but utterly simple theme. Rouse solos superbly on this, whereas Joe Gordon on this and other tracks has an infuriating tendency to blow flat. His solo construction is so good that it would be foolish to suggest that he is off form, but this flatness re­curs so often that one cannot avoid noticing it. I hope it can be attributed to some defect in the room’s acoustics, rather than to his own playing.

“Midnight” is probably the best known of all Monk compositions. This lengthy rework provides an insight to the pian­ist’s mind, from the sombre opening through successive choruses where he seems to be trying to plant chords, if not more, in the soloists’ paths. The group’s closing two minute shot at “Epistrophy”, one of Monk’s earliest works, is interesting but could have lasted five times as long.

The dominance of theme throughout this memorable session is just another pointer to Monk’s brilliance as a composer, or should I say a promoter of musical ideas for others to embellish. Whichever it is, he does it very well, and I feel that the results on this record are the best he has achieved so far.

Brian Payne - 08 March 2019
Rosie Turton, age 26, is a trombonist in the blossoming alternative London jazz scene. She’s a graduate of Gary Crosby’s Tomorrow’s Warriors and is a band member of the...