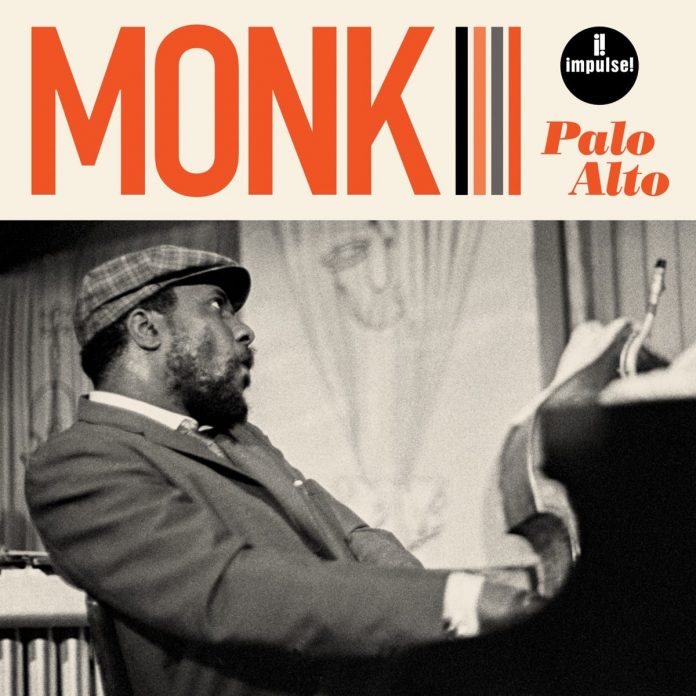 Not another old reel of tape being touted as a lost masterpiece? Er, well, this time it looks as though it might actually be a masterpiece, or near enough as makes no difference. It dates from 1968, when Danny Scher (16), a high school student in Palo Alto, California, managed to persuade the Thelonious Monk Quartet to play a concert at his school one afternoon. The whole story’s in the notes. Not only did they play a 47-minute set, but the school janitor recorded it and, what’s more, it turned out to be a clear, well-balanced stereo recording. To top it all, the band was in terrific form, especially Monk himself.

You can always tell when Monk was feeling inspired, by the boldness of his comping. Actually, it wasn’t really comping at all, more like joining in with the soloist, and what he put in often determined the course of the solo itself. Some of the things he does here, alongside Charlie Rouse on Ruby My Dear and Well You Needn’t, are phenomenal. Rouse seems to have got the hang of playing with Monk quite quickly, unlike several more distinguished saxophonists, and remained with him for 11 years. It’s possible, too, that once Monk had got the hang of Rouse’s playing he was able virtually to read his mind. Whatever the case, the result here is gripping.

These five pieces constitute a typical set by the quartet around this time, which usually included a solo number for Monk – Don’t Blame Me in this case. Another aspect of his playing which lights up now is his sheer mastery of the piano. It’s not a conventional technique by any means, but it’s firm and fluid, with a marvellous variety of texture. He adopts a kind of modified stride style, with four beats a bar in the left hand, either single notes or chords. The tempo doubles for a while, there are tremolo octaves, bold and totally accurate runs the length of the keyboard, all without hesitation. It’s a tour de force that says Monk really was one of the great jazz pianists.

Larry Gales and Ben Riley were the best bass-and-drums team of those that passed through the quartet in the 1960s. Indeed, after Monk’s death, Riley formed a quartet, Sphere, with Rouse to continue performing Monk’s music. His playing here is so alert and apposite that he occasionally finishes one of Monk’s phrases with him, and even his drum solos have a Monkish air about them. Gales plays excellent solos, both bowed and pizzicato, drawing bursts of applause each time.

After playing their set, the quartet left for nearby San Francisco, where they were appearing that week at Jazz Workshop, leaving behind them a delighted , if somewhat dazed, hall-full of students, their parents and friends.

This group could easily be described as the modern jazz veterans, most of them in their 70s and Billy Hart over 80. The septet...

Despite the 1958 Annie Ross / Gerry Mulligan precedent, a combination of voice and baritone sax might seem implausible. In fact, Surman plays soprano,...

"You can always tell when Monk was feeling inspired, by the boldness of his comping. Actually, it wasn't really comping at all, more like joining in with the soloist, and what he put in often determined the course of the solo itself. Some of the things he does here, alongside Charlie Rouse on Ruby My Dear and Well You Needn't, are phenomenal"Dave GellyThelonious Monk: Palo Alto
Advertisement