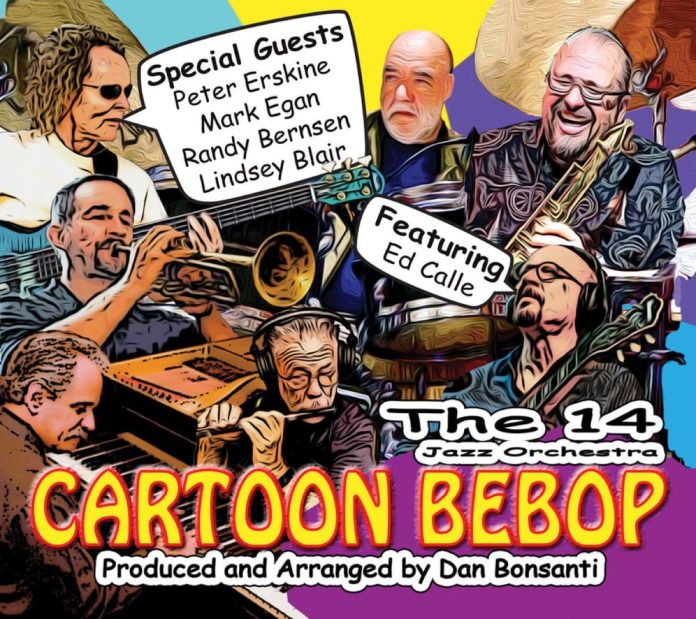 The 14 Jazz Orchestra’s third release finds them performing a heady brew of bebop, fusion and Latin. Recorded remotely during the pandemic it presented the leader, producer and arranger Dan Bonsanti with considerable difficulties. “One of the unique challenges was finding compatible players with home studios who were able to record at home.”

With that in mind this release is really quite remarkable. The two extremes of the orchestral palette – tuba and piccolo – introduce Cartoon Bebop (yet another I Got Rhythm contrafact) which finds three of the band’s stellar soloists Ed Calle (tenor) Jason Carder (trumpet) and Ed Maina (alto) stretching out creatively on one of the idiom’s most popular harmonies. There is the merest hint of Thelonious Monk’s I Mean You in the coda.

Mike Levine (piano) and Ed Maina (flute) embrace the subtle chord structure of the lovely I’m All Smiles which was one of Barbra Streisand’s early releases back in 1964.

Herbie Hancock’s Driftin’ was premiered on the composer’s first date as a leader in 1962. It has the foot-tapping laid-back swing that the Basie band used to specialise in and Ed Maina and Jason Carder (in a harmon) keep things intense and smouldering.

Gordon Jack - 03 February 2021
Charlie Rosen’s 8-Bit Big Band explores what the press-release calls “The Great Video Game Songbook” on this, their third release. The ensemble is essentially a jazz/pops orchestra featuring over...