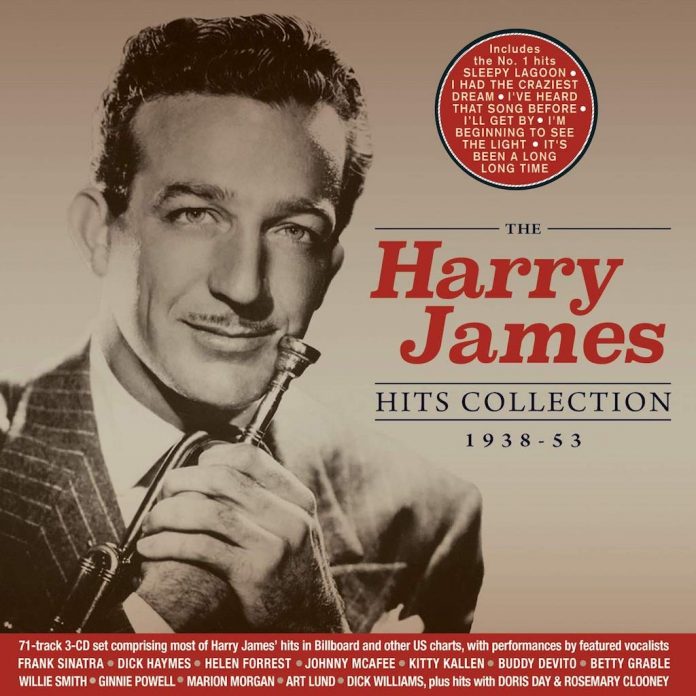 In one of his films Woody Allen is asked who he’d be if reincarnated. He decides on Warren Beatty’s fingers. If metempsychosis doesn’t allow me to be a peregrine or merlin, I’d quite like a shot as Harry James’s lips. And not just for the more obvious reasons. You could hardly put together a more joyous and charismatic package of material than this. The 1941 “Trumpet Rhapsody” always makes me smile, though I have a special affection for the tracks made the following year, now under the shadow of war, with Helen Forrest.

James was a regular presence in the hit parade at this time, though as far as I know only “Sleepy Lagoon”, one of his wetter (so to speak) numbers, “I’ve Heard That Song Before”, “I Had the Craziest Dream” and “I’ll Get By” won the top spot, at least until late in the war and the comparatively dull “I’m Beginning to See the Light”. “I Don’t Want to Walk Without You” (from Sweater Girl) and “Mister Five by Five” (both of them with Forrest) were both beaten to number one, as were a couple of others, this despite the fact that Harry was widely considered to be God’s Gift, to music as well as to women.

He took a dim view of any suggestion that he played to the commercial middle, always insisting that jazz was at the centre of everything he put out. It’s hard to argue with that here. The facility of his tone never disguises the intricacy and thoughtfulness of everything he played, even if the attention was directed to the singer.

Of those who worked with him at the time, Frank Sinatra was to be the most prominent in later life. Harry wanted him to go out as “Frankie Satin”, but was turned down, apparently quite robustly. James regarded singers as a necessary evil, but with the emphasis on necessity. Frank sings on “Ciribiribin”, which in some ways is the archetypal James track, sentimental and courageous by turns, delivered with a technique so outrageously honed you forget the amount of work that went into it. No coincidence that he came out of a family of circus performers: no one walks the line between schmaltz and real danger quite so confidently as circus folk.

There are lots of James compilations out there. You can wade through the Classics reissues one by one, if you have the patience and don’t mind the impression of tinnitus. There’s a good Columbia set of the Sinatra material on Columbia, with cleaner sound. I enjoyed these enormously, and found nothing to complain about.

Discography
CD1: It’s The Dreamer In Me (vocal: Helen Humes); One O’ Clock Jump; Ciribiribin (vocal: Frank Sinatra); Music Makers; Flight of the Bumble Bee; Trumpet Rhapsody (Part 1); Lament to Lament (vocal: Dick Haymes); You Made Me Love You (I Didn’t Want to Do It); A Sinner Kissed an Angel; Misirlou; I Don’t Want to Walk Without You (vocal: HF); Skylark (vocal; HF); Easter Parade; Sleepy Lagoon; One Dozen Roses (vocal: Jimmy Saunders); Strictly Instrumental; But Not for Me (vocal: HF); He’s My Guy (vocal: HF); I Cried for You (Now It’s Your Turn to Cry Over Me) (vocal: HF); Manhattan Serenade (vocal: HF); Mister Five by Five (vocal: HF); I Had the Craziest Dream (vocal: HF); Daybreak (vocal: Johnny McAfee); The Devil Sat Down and Cried (vocal: HF, Dick Haymes, HJ, Dalton Rizotto, band). (76.32)
CD2: I Remember You (vocal: HF); Flash; I’ve Heard That Song Before (vocal: HF); Moonlight Becomes You (vocal: JMcA); Velvet Moon; Prince Charming; All or Nothing at All (vocal: FS); I Heard You Cried Last Night (vocal: HF); Two O’Clock Jump; Cherry; Jump Town; I’ll Get By (As Long as I Have You) (vocal: DH); Back Beat Boogie; On a Little Street in Singapore (vocal: FS); Memphis Blues; Sleepy Time Gal; Every Day of My Life (vocal: FS); Estrellita (Little Star); It’s Funny to Everyone But Me; I’m Beginning to See the Light (vocal: Kitty Kallen); I Don’t Care Who Knows It (vocal: KK); I Guess I’ll Hang My Tears Out to Dry (vocal: KK); Yah-Ta-Ta Yah Ta-Ta (vocal: KK); The More I See You (vocal; Buddy Divito). (73.24)
CD3: If I Loved You (vocal: BV); 11:50 P.M. (vocal: KK); I’ll Buy That Dream (vocal: KK); It’s Been a Long Long Time (vocal KK); Autumn Serenade; Waitin’ for the Train to Come In (vocal: KK); I Can’t Begin to Tell You (vocal: BG); I’m Always Chasing Rainbows (vocal: BV); Who’s Sorry Now? (vocal: Willie Smith); Do You Love Me (vocal: GP); And Then It’s Heaven (vocal: BV); This Is Always (vocal: BV); Oh, But I Do (vocal: BV); Jalousie (Jealousy); Heartaches (vocal: Marion Morgan); I Tipped My Hat and Slowly Rode Away (vocal: AL); Stella by Starlight; I Still Get Jealous; Mona Lisa (vocal: Dick Williams); Would I Love You (Love You, Love You) (vocal: Doris Day); Castle Rock (vocal: FS); You’ll Never Know (vocal: Rosemary Clooney); Ruby (69.34)
James (t) and Orchestra, plus singers as listed above.
Acrobat ACTRCD09075