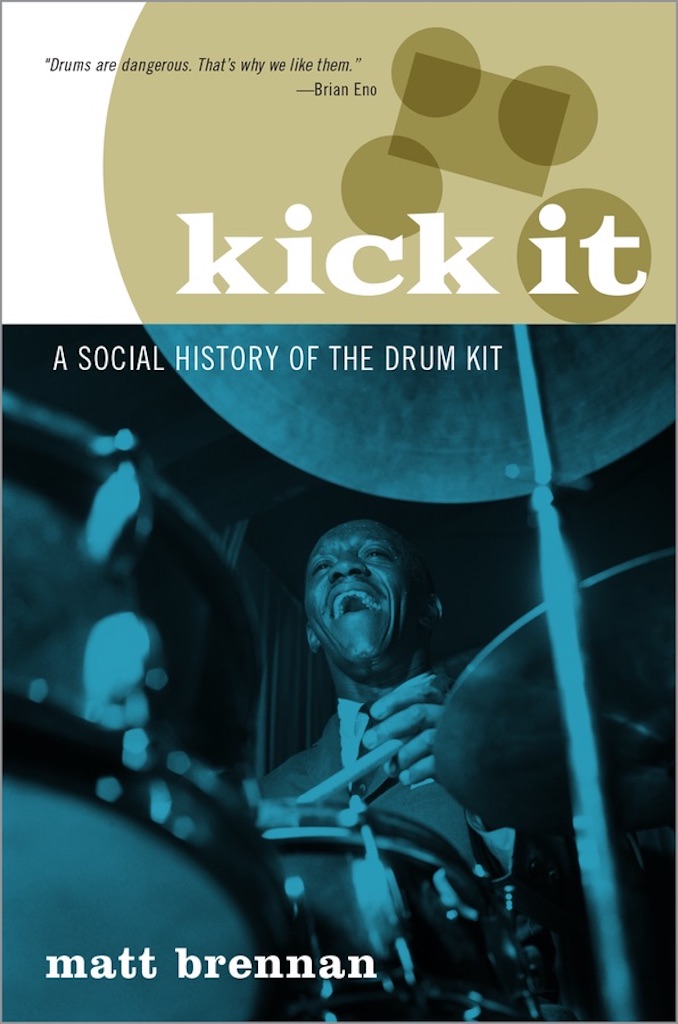 Matt Brennan is a drummer, and protégé of socio-musicologist Simon Frith. As Brennan rightly comments, it’s bizarre that there’s been no book-length scholarly history of his instrument. Adolphe Sax is well-known as the inventor of the saxophone, but less thought has been given to the invention of the drum-kit – which maybe reflects the denigration of the drums, that rightly exercises Brennan. Hence this “drum-centric history of music as a whole from the 19th century to the present: drum-centric because the kit profoundly shaped this history, yet rarely gets credit for doing so”. It’s a fascinating story, that considers business economics, race and gender relations, and high and low culture. Brennan aims to address the status of the drummer as musician, the kit as instrument, and drumming as practice. In this he succeeds admirably.

A key development in the drum-kit’s history was the appropriation of Turkish Janissary music by European military bands and orchestras. In 1618, the maker of a bronze alloy for cymbal-making was given the name “Zildjian” by the Sultan – meaning “cymbal-maker, son of”. Cymbals were essential to the alla turca genre appropriated by Mozart; in the 19th century, cymbals and bass drum appeared in the Western orchestra. “Trap” is short for the Victorian “trappings” – sound effects and percussion that drummers played in theatre gigs. The earliest example of what Brennan calls a “pre-bundled setup” of bass drum, snare drum, cymbal and accessories dates from 1906. Ludwig patented his hallmark bass drum-pedal design in 1909. The hi-hat was invented in the 1920s, and wire brushes were not used in jazz till that decade. In the 30s, Gene Krupa helped create the modern kit design. He abandoned the traps and accessories of theatre and silent film, emphasising tom-toms and suggesting a thinner cymbal.

Earl Palmer: “Jazz is all anybody played until we started making those [R&B] records. The backbeat came about because the public wasn’t buying jazz, so we put something in that was simpler.”

I learned a lot from the book. Chinese tam-tams are tom-toms; travelling salesmen in the 19th century used to beat on drums, “drumming up business”. In the 1870s, “tin can alley” meant a poor neighbourhood, where people would gather to hit pots and pans outside the home of a wrongdoer, hence “panning”; “tin pan” described unwanted sounds, hence Tin Pan Alley as Manhattan’s home of popular music publishers. The hand-operated sock cymbals played by Zutty Singleton on My Monday Date are “Bock-a-da-Bock cymbals”. I’d not considered how the “straight feel” of rock ‘n’ roll evolved from swing. Little Richard pounds a straight feel on his 1956 Slippin’ And Slidin’, while drummer Earl Palmer still plays a swing shuffle. As Palmer commented: “Jazz is all anybody played until we started making those [R&B] records. The backbeat came about because the public wasn’t buying jazz, so we put something in that was simpler.” Most of Elvis’s 1950s hits had a feel between straight and swing. Brennan mentions Latin music as a precursor of a straight feel – I’d like to know more about the evolution.

He then moves on to a persuasive defence of Ringo Starr, “a technically great drummer for all the reasons that made him different from jazz drummers”. In 1962-3, Ringo’s kit was recorded on two mics; the recordings were mono. When Geoff Emerick became chief engineer on Revolver in 1966, he muffled the bass drum with a sweater, and enhanced the close miking of the kit, a process intensified on the band’s final albums. The resulting drum sound was “simultaneously deep and deadened yet close and present”. This approach contrasted with the live, present sound favoured for instance for John Bonham of Led Zeppelin, and has led to much debate. Brennan takes the technological story up to the present, with discussion of drum machines and current developments.

There are many other insightful discussions. Brennan outlines the confused understanding of the relation between music and noise (pp. 66-68) – I’d add that rhythm is a defining feature of tone, and so drums are essentially tonal and therefore musical. He looks at gender imbalance, and the demand for female bands during World War II. There’s a sad detail in the story of Buddy Rich. At the age of four in 1921, he became a hot act on the Broadway theatre circuit – but never went to school, something he felt inferior about the rest of his life.

The book is an entertaining read. Brennan traces the history of drummer jokes back to the 15th century German priest Virdung, who commented that “if beating or making a loud noise is supposed to be Music, then the hoopmakers or the coppersmiths or the coopers must be musicians as well”. But as a drummer, Brennan is maybe over-sensitive. Drummer jokes are popular, but for much of the audience, the drum solo is the gig highlight. The opening of chapter four, on “Creative drummers”, took me aback: “This chapter challenges the idea that drummers are uncreative; it is the story of the drum solo.” Who holds that idea? As far back as Baby Dodds at least, anyone who fails to appreciate the artistry of drummers is a cloth-eared philistine. One of the most memorable gigs I experienced was Art Blakey at Ronnie Scott’s in 1982, when I took care to sit quite close to, if not immediately beside, the drum-kit.

The book is a social, economic and artistic history of the drum kit. The evolution of styles, and the work of leading drummers, is discussed, but in terms of jazz at least it’s not a conventional stylistic history. (Studies of other popular musics tends to have a more social bias anyway.) The book is well-illustrated throughout, and some of the best features are the adverts which characterise their period so well. A really excellent addition to the literature.

John White - 13 March 2019
Not generally considered one of the giants of the tenor sax, Ike Quebec (1918-1963), after working as a sideman for Benny Carter, Roy Eldridge and Cab Calloway, made several...