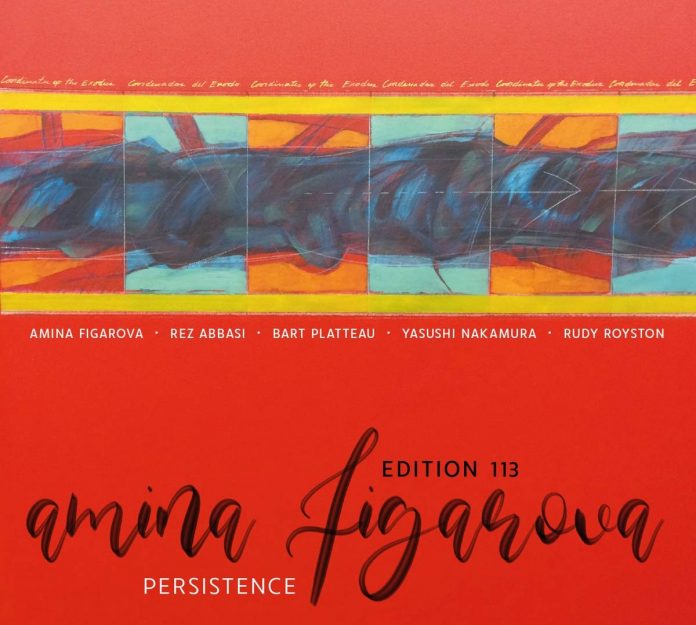 Having spent 20 years performing at places such as the Newport Jazz Festival and New Orleans Jazz and Heritage Festival with her acclaimed acoustic sextet, Azerbaijani-born pianist and keyboardist Figarova has embarked on a divergent yet exciting new chapter with Persistence. Here, she debuts her new electric ensemble Edition 113, which floats somewhere between jazz fusion, idiomatic R&B, innovative hip-hop and progressive funk. Despite all these amalgams of style and genre, Figarova successfully creates a delightful and balanced selection of tracks.

Unlike previous albums where Figarova would sit at the piano and write, here she encouraged neighbouring guests, one of whom was Rez Abbasi, to bring some of their music to try alongside trying Figarova’s own. She has commented that this process proved to be “fun every time and led to a lot of surprises”.

From the get-go, the listener is launched into the immersive rhythmic relationship between Rudy Royston on drums and Yasushi Nakamura on bass. Over this interplay, Figarova comps, fluctuating between piano and synthesizer, whilst her husband and Edition 113’s flautist, Bart Platteau, sits upon his melodies, soaring above the others.

The second track, I’ve Got No Time, features JSWISS in a hip-hop mélange, grounded by JSWISS’s additions, whilst Platteau and Figarova continue to interweave with Abbasi on guitar. Whether this is a fusion yet to be explored, or better left uncharted territory, is perhaps down to individual taste. Having said this, the vocal included on Figarova’s sixth track, Horizons, proves far more entrancing as Paul Jost mirrors Platteau’s melodic line.

Figarova’s willingness to create something wholly outside her 20-year-old comfort zone of acoustic sounds is admirable; she and Edition 113 have certainly discovered something new and electrifying. I have hopes that they continue to develop and investigate this new place they’ve found.

It's difficult to decide whether this solo marathon in Munich three years ago was primarily a serious attempt to repeat its Cologne predecessor of...

The coffee lounge of Liverpool’s Adelphi Hotel is designed to strike awe into all but cabinet ministers and the most eminently U. But in Mr...

Continued from last month...Among the many who have validated Pete's very personal sound is Warne Marsh. At their first meeting on a rehearsal of...

In the October 2017 issue of Jazz Journal, I reviewed Sammy Stein’s All That’s Jazz, and judged it to be simplistic, superficial, poorly written...

Don Cherry has always been an important figure in the avant garde, having worked with many of the most important musicians of the movement....