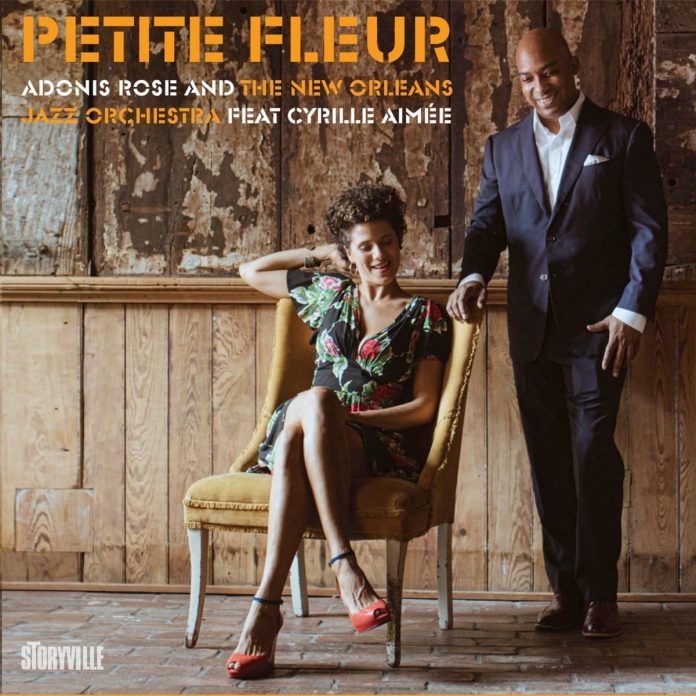 When Adonis Rose was in his teens he played drums in Ellis Marsalis’s quintet and toured with Terence Blanchard. He then worked with Betty Carter and the Lincoln Center Jazz Orchestra. In 2002 he took the drum chair with the New Orleans Jazz Orchestra (NOJO). By 2016 he was the band’s leader.

This is NOJO’s second album under Rose’s direction. It reflects the shared history of New Orleans and France and each track is associated with a musician from one or both of these places. Nine of the tracks were composed by artists such as Sidney Bechet, Burton Lane, Michel Legrand, Django Reinhardt and Jelly Roll Morton. The tenth is an original penned by the band’s French vocalist, Cyrille Aimée, who has recently moved to the Crescent City.

Bechet was a New Orleans resident before migrating to France. His composition, Petite Fleur, opens the album with rich, sonorous bass and features Ricardo Pascal on soprano. Aimée sings it in French. Legrand’s ballad What Are You Doing The Rest Of Your Life? has sparkling trumpet solo and the singer in sultry vein. After a care-worn rendition of Reinhardt’s Si Tu Savais, Aimée follows up with a rocking and at times gutteral delivery of I Don’t Hurt Anymore with suitably growling trombone in accompaniment.

Four of the numbers – The Land Of Beginning Again, On A Clear Day, a fast-paced version of Undecided and Aimée’s own composition have upbeat scatting from the singer. As a rule I’m not a huge fan of this particular vocal style but it does add value here and in this regard Aimée is streets ahead of many singers who attempt it. Carl Sigman’s song, Crazy He Calls Me, has first-rate piano soloing. It’s followed by Jelly Roll Morton’s classic stomp, Get The Bucket, with finger-clicking chants from band members and raunchy tenor sax. Aimée’s energetic foot-tapper Down closes the album with lyrics about her move to New Orleans and features a sparkling duel between trumpets.

All in all, this album delivers smashing arrangements, splendid ensemble playing, top-notch soloists and a versatile, clear-toned singer. Who could ask for more?