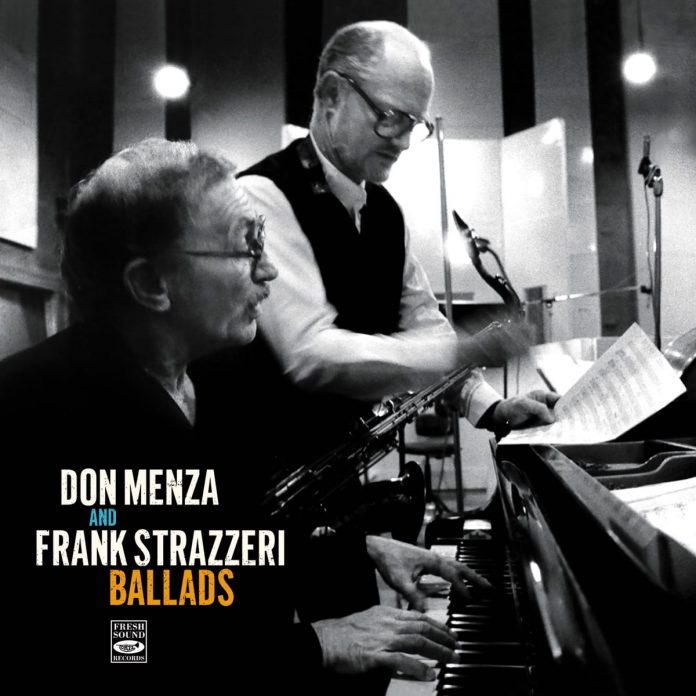 In the original liner note, reproduced here, Gene Lees dwells on Lester Young’s oft-quoted comment about saxophonists needing to know a song’s lyrics if they are to fully interpret a ballad. As Lees indicates, it is clear that Don Menza knows these songs intimately.

A highly accomplished musician, principally playing tenor saxophone, Menza was reputedly self-taught as composer and arranger. That last attribute is especially interesting given his long service as sideman and sometimes arranger with big bands led by Maynard Ferguson, Stan Kenton, Buddy Rich, Louie Bellson and others. In big band settings, as well as with the small groups in which he played and also those he led, his playing was often fiery and aggressive, qualities that contrast strikingly with the reflective mood heard here.

Frank Strazzeri’s performing credits took him through many jazz styles and also found him playing with a Who’s Who in jazz. In the early 1950s, he was briefly house pianist in a Rochester club where the musicians he backed included Billie Holiday. In New Orleans, he played with Sharkey Bonano, then came spells in big bands led by Charlie Ventura and Woody Herman. On settling in Los Angeles, he became an in-demand studio pianist meanwhile playing jazz with a glittering array of jazz stars. Outside jazz, on a number of occasions in the early 1970s he performed with Elvis Presley. Interestingly, although Strazzeri (who died 9 May 2014) played piano from as early as his pre-teen years, when he started out in music he first played clarinet and saxophone and this might well be a factor in the understanding he shows in his accompaniment of Menza.

This recording session in Spain, overseen by producer Jordi Pujol, came as Menza and Strazzeri wound up a European tour. Now, through his Fresh Sound label, Pujol brings back this fine set of relaxed, intimate ballads. This is music of a very high order and should have wide appeal.

Discography
Penthouse Serenade; My Foolish Heart; You’re My Thrill; Over The Rainbow; Darn That Dream; Soultrane; More Than You Know; It’s You Or No One; Guess I’ll Hang My Tears Out To Dry; Smoke Gets In Your Eyes, What’s New; Blues In The Dark (55.01)
Menza (ts); Strazzeri (p). Barcelona, 29 March 1987.
Fresh Sound Records FSR-CD5062

Derek Ansell - 21 March 2021
This sextet plays a contemporary version of hard bop with leader John Lake arranging and composing nine originals for the session. The two standards included here give a clue...