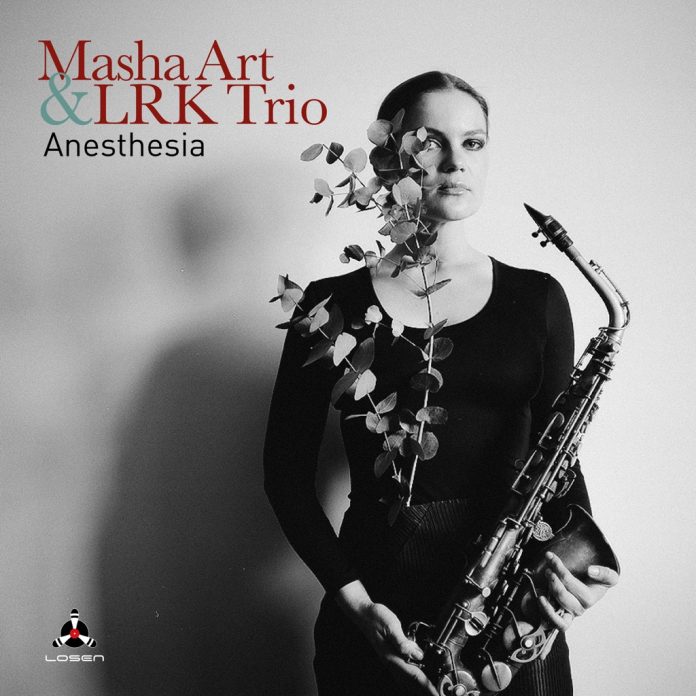 Masha Art is the artist or stage name of Maria Artemenko, a Russian saxophonist who is the main soloist in this recital by the LRK Trio.

Flow is the opening selection, a medium tempo melody, written by Masha and performed here by the foursome with the addition of an interlude by harp soloist Maria Kulakova. The piece has a flowing but distinctly melancholic flavour which is in line with Ms Artemenko’s sleeve note assertion that feeling blue and melancholic is her normal feeling where she feels most alive.

Lavanda’s Dream opens with a reflective and, it should be said, gloomy harp solo. It livens up somewhat with Ms Artemenko’s tenor sax excursion although the music is still on the sad side. It is, she says, dedicated to her dog so that must be a very special animal.

Piano, bass and drums from the LRK group join in the dark and sombre nature of the music, contributing strong supporting rhythm section work. Masha blames St. Petersburg where she lives for the grey and blue colours in her music, thanks to the weather.

The good news is that the blue tinge to her compositions is quite lyrical and free flowing throughout the entire programme. Tempo is not fixed, moods are different and there are inventive solos from Evgeny Lebedev whose heavily chordal piano style adds to the density of the proceedings. The harp solos are also attractive and represent something rarely heard in jazz in my experience – improvised harp lines.

This is Ms Artemenko’s third CD release but her first with Losen Records, the music recorded in Moscow and mastered and released in Norway. This is a good example of jazz chamber music for people in a reflective and perhaps even sombre mood.

Ian Lomax - 13 October 2020
David Bach is a Baltimore-based keyboard player and Fierce Heart is his sixth album release as leader. He is a recipient of the 2019 Maryland Entertainment Hall of Fame...