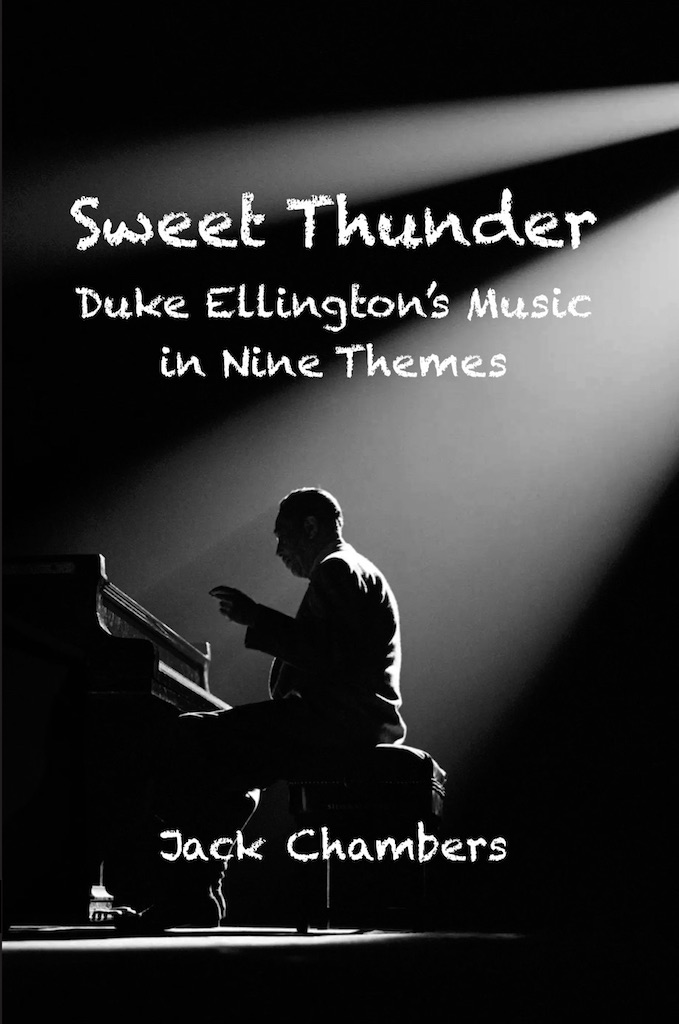 So many books have been written about Ellington that many will wonder what there is left to say. Here however is a book with a novel approach to his music. Jack Chambers is a professor at the University of Toronto and has written highly praised books on both the very famous Miles Davis and the jazz pianist Dick Twardzik – who’s hardly famous at all. He makes annual presentations to the Toronto Duke Ellington Society and this book, as his foreword explains, has arisen from those presentations.

In his own words he hopes “to provide new insights to readers who already know Ellington’s music” and “most of all” to offer “an entry-point for relative newcomers”. As one of the former rather than the latter I found the book thoroughly enjoyable and was particularly fascinated by the ninth theme (or chapter) where the very late composition The River is explored in great detail with reference to versions other than the one with which I’m familiar.

Other themes include the signifance of plunger mutes, tenor players from Webster onwards, the musical chemistry of the Hodges-Strayhorn relationship, the story of “the stockpile”, Ellington’s piano playing and the musical links with Shakespeare and with Asia and Africa. The author’s admiration for Ellington’s music and extensive knowledge of it are on gratifying display throughout.

As someone who shares the admiration and has considerable knowledge of my own, I inevitably found myself in occasional disagreement with the author’s evaluation and emphases. (“Inevitably” because the music is so richly varied that no two people will respond in the same way.) I’ll restrict myself to a single diverging opinion. I feel that in the chapter on plunger mutes there’s insufficient praise for the extraordinary way in which Lawrence Brown, late in his career, mastered the use of the plunger. On a version of The Mooche recorded at Newport in 1963 Brown has a remarkable plunger solo, extending the usual four choruses to seven, and seemingly caught up in the music like a fervent preacher in a gospel church. This solo alone would put him on a par with predecessors Nanton and Jackson.

I must end however by recommending the book to those long familiar with Ellington’s music as well as those newly exploring it. Interesting photographs are scattered throughout and the author’s approachable prose and his willingness to explore byroads as well as the main highway mean that readers from either group should be more than satisfied. After reading it I was briefly sorry that I don’t live in Toronto and have never met Jack Chambers.

Derek Ansell - 28 October 2021
The start of Hilary Kole’s career as a jazz vocalist dates to 1998. As a very young vocalist she did the obligatory club sets of the time which consisted...