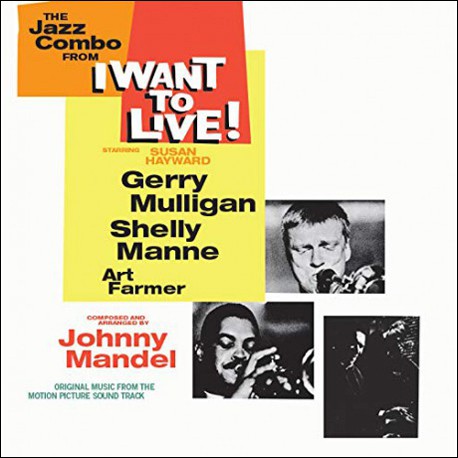 Johnny Mandel’s score for I Want to Live is performed by an all-star septet led by Gerry Mulligan. In the film he is name-checked by Susan Hayward in the Oscar-winning role of Barbara Graham who was executed in San Quentin in 1955. Listening to “Night Watch” on the radio in the condemned cell she says “Gerry Mulligan … I know all his sides by heart”. Bud Shank told me the night-club scene featuring the group was adjacent to the gas chamber set which made it difficult for the musicians who were miming to “Frisco Club”.

Mulligan was so impressed with the music that he commissioned the composer to adapt “Black Nightgown”, “Barbara’s Theme” and “Theme From I Want to Live” for his 1960 Concert Jazz Band. All the horns have a chance to shine on the catchy “Black Nightgown” which is introduced by Red Mitchell’s simple but effective descending bass line. The dramatic “I Want to Live” is a perfect vehicle for the dark sonorities of Mulligan’s baritone contrasted effectively here with the delicacy of Shank’s flute.

Shelly Manne’s mallets are prominent in an atmospheric “Barbara’s Theme”, which has Art Farmer in a cup mute at his most introspective. (Don Ferrara was the soloist when this piece was performed by the CJB). “Life’s a Funny Thing” is notable for some inventive exchanges between Frank Rosolino and Mulligan which was one of their only meetings on record apart from Quincy Jones’ score for the 1972 movie The Hot Rock. Shelly Manne gives a master-class throughout in the subtle art of small-group drumming. Using sticks, brushes or mallets he creates a variety of percussive effects that add colour, shading and drama to each selection.

Poll Winners has added the complete soundtrack from I Want to Live, featuring a 27-piece orchestra made up of the cream of Los Angeles studio musicians. Also included are three titles from The Subterraneans film. Mulligan’s first chorus on “Things Are Looking Down” became the basis of his original “Subterranean Blues”.

Barry Witherden - 23 January 2021
I’ve been an admirer of Pirog’s music since 2012 when I first heard Where Is Home, the album he made with Janel Leppin, his equally talented and versatile musical...

Jazz Journal - 30 November 2020
Not before time, the reissue bandwagon has trundled forward into the 1970s, and one of the welcome results is the first of a two-volume retrospective on the legendary Brecker...