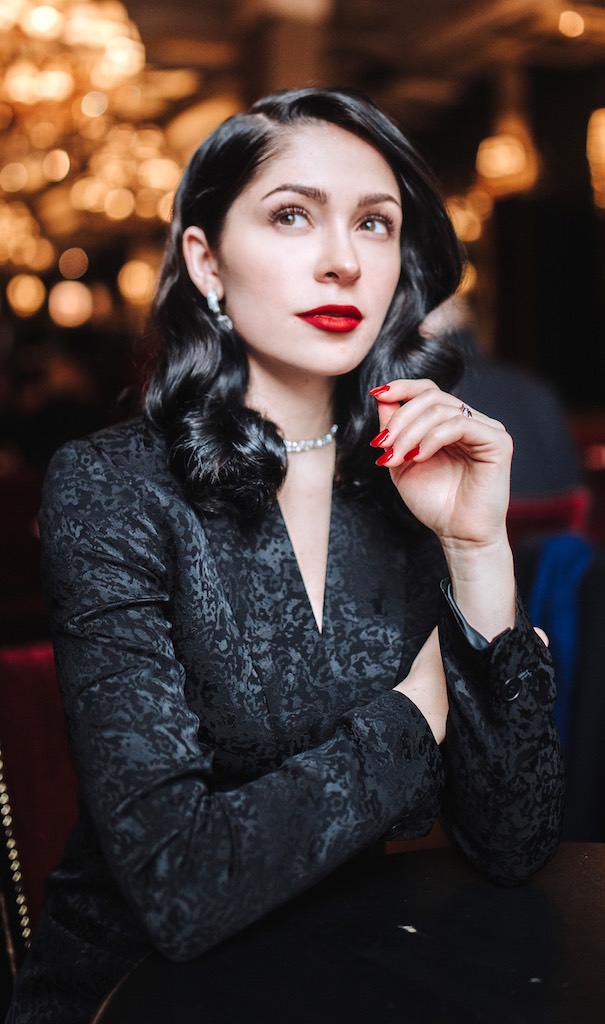 As someone with a serious penchant for the Great American Songbook my antennae are constantly scanning the supper-club radar for new practitioners. When I heard that 23-year-old Lucy Merrilyn would be bowing at Crazy Coqs at the tail end of February I allowed serendipity a fighting chance to broker a potentially delightful meeting.

It started elegantly with a rhythm section – Harry The Piano, Dave Swift, bass, Joel Barford, drums – that made the MJQ appear comatose, picking the bones out of Lerner and Loewe’s Almost Like Being In Love, followed closely by the main event, Ms. Merrilyn, belting out the atypical opening number I Love Being Here With You and before I say any more about what promises to be a valued addition to the jazz/cabaret scene perhaps you’ll permit me the odd caveat. Indulge me; I’m not as young as I was.

So far the best thing about Lucy is her repertoire; out of an even dozen numbers 10 were genuine triple-distilled bottled-in-bond standards from seriously heavy hitters like Irving Berlin, Noel Coward, Vincent Youmans, through some of the new boys (Burt Bacharach) via the sadly neglected Allie Wrubel and Arthur Hamilton, and here’s my first beef, albeit minor: I know these writers because it’s what I do but it’s more than likely that a good 50 per cent of the SRO audience did not and Lucy failed to name check even one. She is, of course, young, and just starting out but I’m willing to bet the farm that if she begins acknowledging that some highly talented people actually wrote the material she is performing so her act will take on a finer lustre.

The good news is that she has a fine, powerful set of pipes, the bad news is she was obviously frightened as a child by Shirley Bassey, just as Bassey in turn was frightened by Ethel Merman which means that when any of the three is moved to attempt a ballad you can hear it in Upper Sandusky. That’s it with the reservations. This performer has the makings of a really valuable addition to the scene, the fact that she even knows a ballad like Allie Wrubel’s The Masquerade Is Over, which dates from 1938, enjoyed a short shelf-life then disappeared off the radar, speaks volumes and bodes well for the future. Once she learns to introduce colour and nuance into her delivery I envisage a bright and successful future for this performer.

Steve Voce - 28 December 2019
It takes all of two minutes of the first track before the first cliché hits, and then they keep coming. The dynamic trumpeter had been dragged from obscurity by...