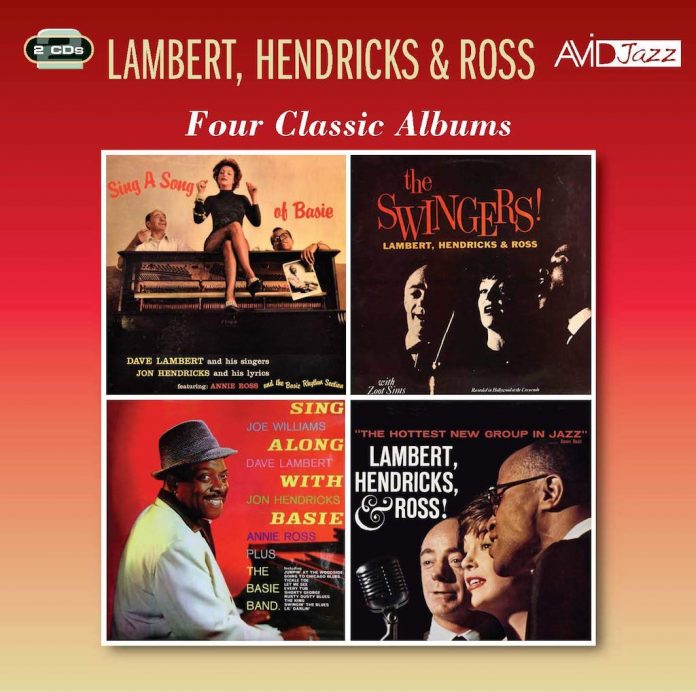 Dave Lambert and Jon Hendricks first collaborated together in May 1955 when they recorded “Four Brothers” and “Cloudburst” for the Decca label. “Cloudburst”, with a noted tenor solo by Sam “The Man” Taylor had been a big R&B hit for Claude Cloud and his Thunderclaps six months earlier. It was to remain in Lambert and Hendricks’ repertoire for the next few years. Another big vocalese hit was King Pleasure’s “Moody’s Mood for Love” with lyrics by Eddie Jefferson which was named record of the year in 1953 by Downbeat magazine. Annie Ross of course was already thoroughly familiar with the idiom as she showed with her 1952 lyrics to “Twisted” and “Farmer’s Market”, which had been recorded by Wardell Gray.

Sing a Song of Basie was originally conceived as a vehicle for Jon Hendricks and Dave Lambert with studio singers sight-reading the parts. Annie Ross was hired initially to coach the singers on adapting to jazz rhythms – in other words how to swing. They could not cope at all which is when Dave decided to multi-track with the voices of Lambert, Hendricks and Ross, creating the whole sound of Count Basie’s band. That concept was relatively new in 1957 but Les Paul and Mary Ford had already shown how well it could work with a succession of hits.

LHR used the current Basie band’s rhythm section with Nat Pierce – a natural in the role – taking Count’s place. They were joined by the full Basie band on Sing Along, together with Joe Williams who reprises “Goin’ to Chicago Blues” and “Rusty Dusty Blues”, originally performed by Jimmy Rushing. Annie Ross’s tender reinterpretation of Wendell Culley’s trumpet solo on “Lil’ Darlin” is an album highlight and Hendricks performing Illinois Jacquet’s extended solo on “The King” is another.

The Swingers! benefits from the presence of Zoot Sims who could swing at the drop of a hat as he demonstrates on “Airegin”, “Swingin’ ‘Till the Girls Come Home” and “Love Makes the World Go ‘Round“. Ms Ross excels again on “Now’s the Time”, where she negotiates the tricky intervals of Miles Davis’s two choruses, which take her to the top of her very considerable range. The well-named Hottest New Group in Jazz has another star guest in Harry Edison – the master of understatement – who performs his own “Centerpiece” which is better known as “Keester Parade”. LHR remain true to the Gil Evans arrangement of “Summertime” from Miles’s Porgy And Bess recording on yet another Avid reissue that can accurately be called classic.

Derek Ansell - 31 December 2020
Although Dizzy Gillespie was the first bop musician to record with strings, in 1946, it was Parker’s two 10" LPs that caught the public’s attention and, indeed, started a...