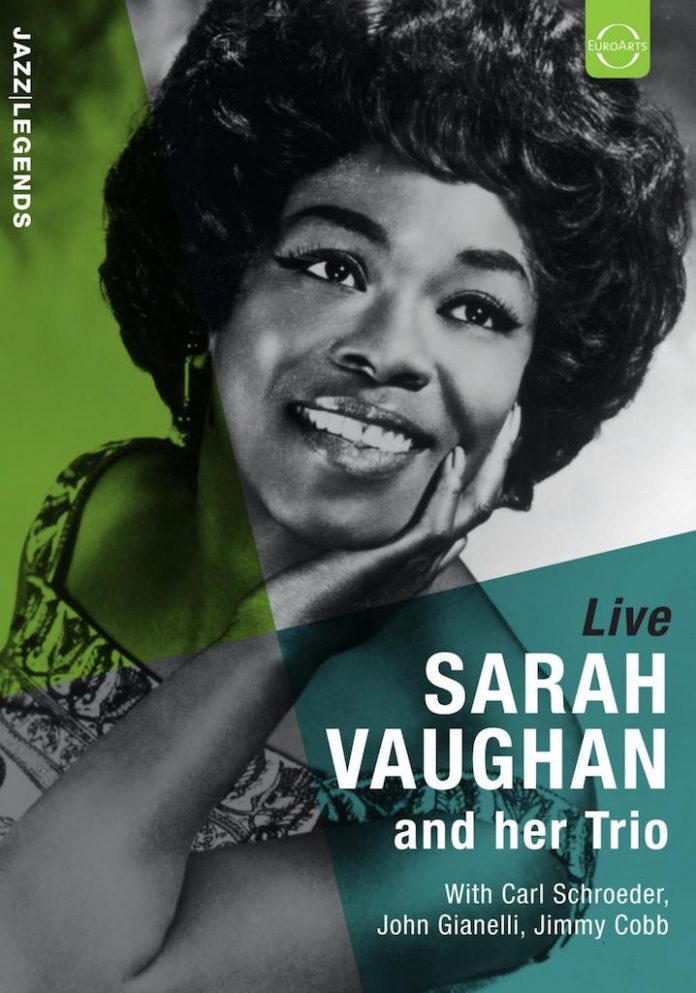 Aged 50 at the time, 1974, Sarah Vaughan is in her vocal prime here. This release presents two television shows that were under the title Jazz From Newport, although from all appearances everything might well have been filmed on the same occasion at the Marni Theatre in Brussels.

Apparently just two cameras are used (at one point she asks nicely that one of these be moved as it obstructs the audience’s view of the stage) and the camera work is happily gimmick-free, centring on Vaughan, mostly close-up head shots.

The first show starts with A Foggy Day In London Town and The Summer Knows, after which the singer introduces her accompanists, pianist Carl Schroeder, bassist John Gianelli and drummer Jimmy Cobb. Then, at the urging of Schroeder, she tells the audience, just in case they didn’t know who she is, that her name is Carmen McRae. Then come On A Clear Day, ’Round Midnight, I’ll Remember April, Over The Rainbow, I Cried For You, Rainy Days And Mondays, and Sassy’s Blues. The last named opens with a solo by Schroeder, then follow a wordless improvisation from Vaughan and solos by Gianelli and Cobb before the singer returns, after which are rolled the end credits for the original television screening.

Vaughan opens the second show with Tonight and I Remember You, then, at the request of an audience member, I’m Just A Gigolo, even though she knows almost none of the words. It doesn’t matter, it’s still very good, musically and vocally speaking, and, as is well known, lyrical interpretation was not high among Vaughan’s preferences. Similar comments can be made about the next piece, a wordless improvisation on a song, the title of which escapes me (and the sketchy sleeve is no help). She then sings Summertime, There Will Never Be Another You, Misty (impromptu in response to another request, this time having no problem with the words), Tonight is reprised, then Tenderly, which is followed by the closing credits.

I have no way of knowing if what happens next was shown when screened on television or if it is an outtake. Whatever, it’s a lovely finale. Gianelli and Cobb leave the stage and Vaughan sits at the piano and (with Schroeder holding the mike for her) accompanies herself as she sings Body And Soul. Throughout, Sarah Vaughan displays her outstanding musicianship, shows her enjoyment in performing for an audience, and most of all her love for music. As indicated, she is in superb form and her voice is quite magnificent.

Click here for more details and buying information on Sarah Vaughan and her trio: Live

Steve Voce - 15 April 2021
How good it is to hear these tracks again! Although at the time the Messengers used this programme at almost every concert they played, everyone managed to sound fresh...