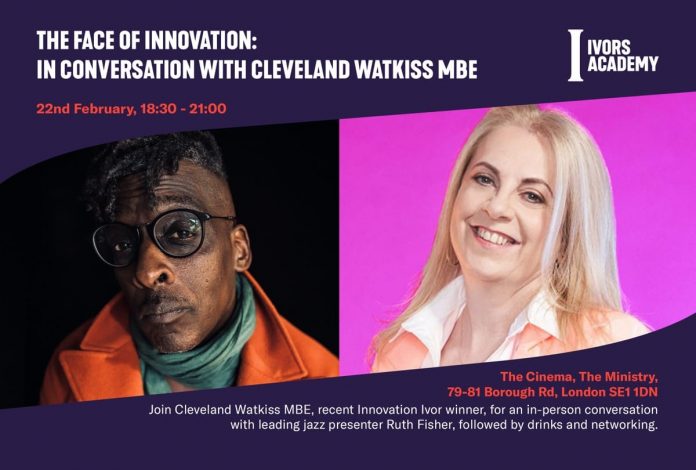 Ruth Fisher, said to be a leading jazz presenter, will interview the singer Cleveland Watkiss in London on 22 February. Watkiss, who may be remembered, for example, for his Green Chimneys album released as the 1980s London jazz “boom” peaked, is described as “a multidisciplinary creative artist and celebrated pioneer” who has collaborated with, among others, Björk, Talvin Singh, the Royal Philharmonic Orchestra and The Who.

The interview, titled “The Face of Innovation: In Conversation with Cleveland Watkiss MBE” takes place before an audience under the auspices of the Ivors Academy, a collective of music professionals that was rebranded as such from the British Academy of Songwriters, Composers and Authors in 2019.

Watkiss, now 62 years of age, is a professional member of the academy and won the Ivor Novello Innovation Award in 2021. The body describes itself as “the UK’s only community for songwriters and composers”, adding: “We are run by our members who create music across all styles and genres. If you write songs, symphonies or syncs you should join us.”

The interview takes place at The Cinema, The Ministry, 79-81 Borough Road, London, SE1 1DN from 18.30-21.00, 22 February. The event is free for IA members and £15 for others. Tickets can be booked here and include “networking drinks at the bar after the session”.

Watkiss has a new album out 25 March titled The Great Jamaican Songbook Vol. 1 (Cdubya Music / CDUB 1), presumably in response to the familiar catchall, the Great American Songbook. The repertoire is said to be roots-reggae orientated with numbers from Gregory Isaacs, Dennis Brown and Burning Spear in the set list, but Watkiss tours the album from next month with a band featuring a number of jazz players so in the live readings some blowing over a modal kind of setting seems likely. The lineup is: Byron Wallen (t), Ray Carless (ts), Delroy Murray (b), Orphy Robinson, Phil Ramacon (kyb), Alan Nolan Weekes (g) and Carl Robinson (d).

Michael Tucker - 21 March 2021
I've enjoyed the free-flowing, sometimes Jarrett-like work of the Danish pianist Dahl (born 1967) live in various groups, as well as solo. Much of his best work has been...