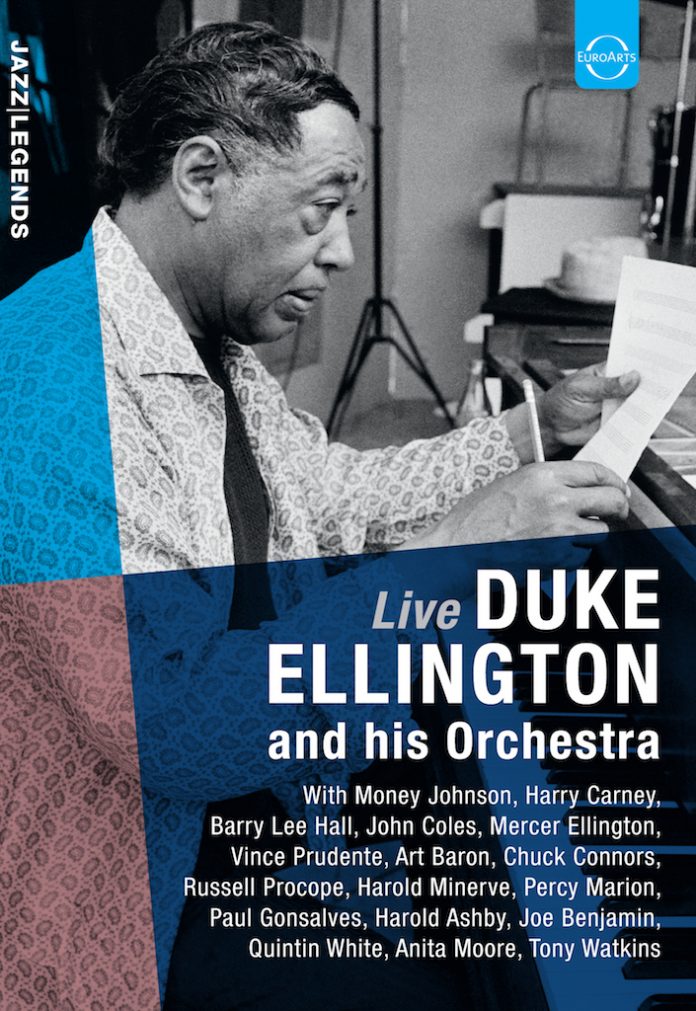 In 2005 Jazz Door released a DVD (seemingly now unobtainable) containing music by Duke Ellington and (separately) Sarah Vaughan, supposedly from Berlin concerts in 1969. In fact three of the Ellington tracks were from Berlin in 1973 and until now these had provided the only available video record from Duke’s final tour of Europe.

This surprising release, almost half a century after the event, is therefore very welcome. It apparently consists of a film made for Belgian TV and the programme matches exactly a concert listed in the major Ellington discography as occurring on November 16th 1973 in the Palais Des Beaux Arts in Brussels. The DVD details provided agree with 1973 and with Brussels but assert, as the film’s end-credits confirm, that the venue was not a Palais but simply the Marni Hall.

Duke’s final band clearly suffered in comparison with earlier incarnations, but this is a marvellous record of the relaxed and idiosyncratic way in which he would present himself and his band to the audience. Apart from Money Johnson being off-mike on ‘A’ Train the sound quality is exceptional and visual clarity and colour are excellent.

Harold Ashby has his usual impressive workout on Chinoiserie but other instrumental contributions are brief and/or familiar (Procope and Carney) and the surprising star of the show – after the leader – is vocalist Anita Moore, who has much more visual charisma in close-up than when I saw her from a distant seat back in 1973. She combines very effectively with Tony Watkins on Somebody Cares (his only contribution) and this has an inaudible obbligato from Paul Gonsalves who had arrived late, pretending to be the appointed escort for Ms. Moore as she came on stage.

His usual solo spot on C Jam Blues had been taken by Percy Marion, but there are a number of shots of Paul grinning happily. This of course adds to the poignancy of our knowledge that he, Ellington himself and Harry Carney would all be dead less than a year later.

The incomplete details provided fail to list In Duplicate (an uptempo romp for Harold Minerve and Art Baron) and Metcuria The Lion (a piano theme which develops into a showcase for drummer Rocky White). They also list an encore without explaining that this consists of Raymond Fol at first, and then Claude Bolling, coming on to play piano solos with the band on two further versions of ‘A’ Train (appropriately compressed). Duke, having humourously dusted off the pianist’s stool, leans over the piano admiringly and enjoys Bolling’s quotations and pyrotechnics in particular. He then tells the audience, optimistically, that he hopes to be back soon and instead of the usual “Love you madly” his final words are “God bless you”.

Though not the best of Ellington’s music this is strongly recommended as an invaluable souvenir of his appearances in concert and a unique memento of his last visit to Europe.

Click here for more details and buying information on Duke Ellington and his Orchestra: Live

Derek Ansell - 28 June 2021
Pike recorded this album, his second date as a leader for Epic, a subsidiary of Columbia records, in 1962. A little earlier he had recorded his first leader LP...

Pieces Of A Dream: Fired Up!