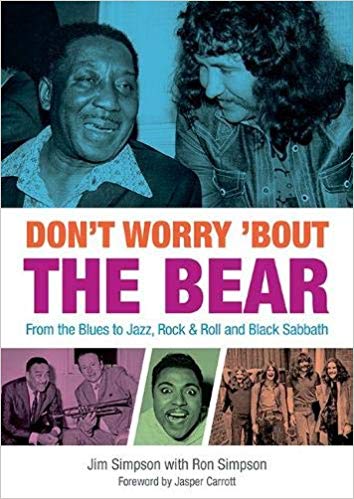 Jim Simpson has been a musician, bandleader, promotor, record producer, festival director, manager, journalist and photographer in his nigh on 60 years in what is still somewhat bafflingly called the music business. This is his autobiography, rich in anecdotes and enthusiasms but not offering much insight into how he’s managed to survive in a business not noted for the wisdom in the heads it attracts.

If claims to fame have any cachet, then Simpson’s status as the link between Kenny Baker and Black Sabbath is nothing if not unique; that said, I eagerly await input from a JJ reader who can prove me wrong.

Given that he has spent most of his musical working life in Birmingham, UK, and thus in what are still patronisingly referred to as the provinces, professional life might not have been as easy as it could have been. But again Simpson doesn’t offer much insight into the particularities of his situation outside of the bright and breezy approach which is a hallmark of the book. That’s darkened only by his dealings with the figures behind the short-lived Ronnie Scott’s in the city, where his honesty comes into its own.

Simpson emerges as a man of both passion and convictions, passion for the music that engages the JJ readership, or at least a fair percentage of it, and convictions over figures such as eccentric bluesmen, many of whom were toured and recorded by his Big Bear company in the 1970s (the bear referenced in the book’s title) and the pianist Justin Randall (from Leyland, Lancashire) who, Simpson contends, is the finest exponent of New Orleans piano on the planet.

The book is based on a kind of chronology loose enough to cater for the many diversions that spring up in a manner redolent of an easy, agreeable conversationalist. In that sense the result is a close reflection of the many roles Simpson has had over the years, and the consequent lack of pretension is like a breath of fresh air in a mini-heatwave.

Don’t Worry ’Bout The Bear: From The Blues To Jazz, Rock & Roll And Black Sabbath, by Jim Simpson with Ron Simpson. Brewin Books.

Click here to buy Don’t Worry ’Bout The Bear: From The Blues To Jazz, Rock & Roll And Black Sabbath
Advertisement

Gordon Jack - 27 March 2019
John Fedchock began playing with Woody Herman in 1980 and for the next seven years he toured with the Thundering Herd as music director and featured soloist. He went...