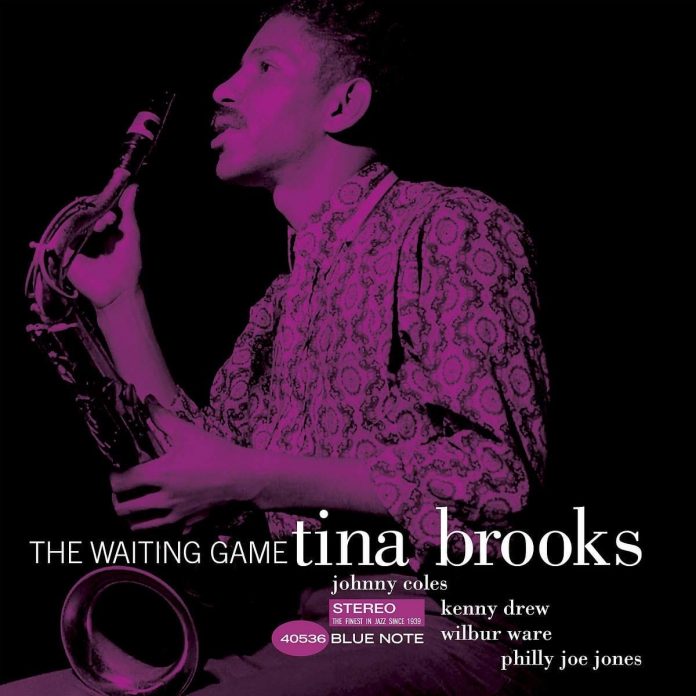 One of the great missed opportunities in jazz recording was Blue Note’s failure to release three of the four leader sessions that Brooks recorded for them between 1958 and 1961. Only the second LP, True Blue, was released and two excellent follow-up albums, Back To The Tracks and this last one, were left in the vault.

It took until the 1980s for these sessions to make it on to CD. Listening to the music on The Waiting Game it seems inexplicable. Brooks is on great form all through as is Coles on trumpet and the rhythm section.

Talkin’ About is a minor blues with a shuffle beat with deep blue, soulful solos from Brooks and Coles and enough fire from the rhythm section to burn a castle down. One For Myrtle goes at great speed, Philly Joe taking command in the rhythm section on both ensemble and the various solos. Wilbur Ware is strong with a firm, resilient beat and almost as good a partner for Jones as his old mate Paul Chambers.

Brooks shows his warmth and lyric capacity to the full on Stranger In Paradise, the melody borrowed from Borodin and the closest thing to a ballad here. Drew demonstrates his lyrical command here with his piano solo.

The title track, The Waiting Game, has a blistering solo from Brooks, his invention never failing for a single second and the whole track cruising along wonderfully, courtesy of Drew, Ware And Philly. This was one of the great blues-based hard bop combos that few people ever heard.

All six tracks are first rate, suggesting that had this been issued in 1961 it might have altered Brooks’ life for good and set him up for the success he never achieved. All Brooks’ four LPs had first-rate sidemen but this one, more than the others, suggests that these five would have made an ideal contemporary combo for touring, night club and concert hall appearances.

It is however fitting that this LP has been chosen as one of a fair-sized batch of top Blue Note sessions being reissued in the label’s Tone Poet series. The sound has been faithfully restored and remastered by Kevin Gray at Cohearent Audio (sic) and the discs issued in glossy gatefold covers with the centre pages featuring photos by Francis Wolff of all the musicians on the date.

Audiophile 180-gram vinyl is the means by which classic music such as this should be heard. It has taken Blue Note 60 years but finally, they have done full justice to one of their great, neglected recordings.

Leon Nock - 08 March 2021
It’s rare to come across an album in which Joni Mitchell cosies up to Cole Porter and Jerome Kern (at least on my block) and it’s even rarer to...