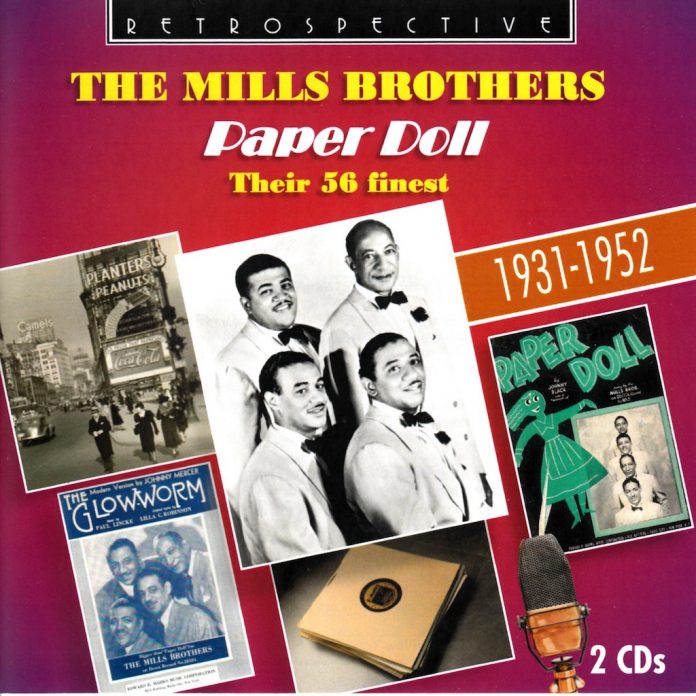 The Mills Brothers formed their singing group in Piqua, Ohio around 1925, at first naming themselves Four Boys and a Kazoo. They were real-life brothers, Herbert, Harry, Donald and John Jr., and their local popularity spread nationally when they began making records in the early 1930s.

Determined to be self-sufficient, from the outset the group usually sang without outside accompaniment. This was achieved by John Jr. playing guitar while his brothers imitated musical instruments, creating vocal representations of trumpet or trombone or bass.

Among early successes were Chinatown, My Chinatown, Sweet Sue, Just You, Sleepy Head, Lazybones and Nagasaki. In those years, the sound of the group was a beguiling melding of many vocal styles, including early minstrelsy and barbershop singing, which were soon superseded by touches of jazz and all cloaked in sophisticated harmonisation.

The brothers sing with a relaxed swing and their feeling for jazz continued to grow. This last quality meant that many leading jazz artists of the day were happy to join them in recording studios and on radio shows, while their commercial appeal brought in artists from the wider world of popular music. Among those with whom the brothers recorded are Louis Armstrong (Carry Me Back To Old Virginny, Cherry and Marie), Duke Ellington (Diga-Diga-Doo), Ella Fitzgerald (Dedicated To You), Bing Crosby (Dinah, Shine, My Honey’s Lovin’ Arms), Al Jolson (Is It True What They Say About Dixie?) and a little later Tommy Dorsey (Please Don’t Talk About Me When I’m Gone), Sy Oliver (Be My Life’s Companion) and Hal McIntyre (The Glow-Worm).

Among yet more popular successes for the quartet, several of which remained in their repertoire, are Jeepers Creepers, When You Were Sweet Sixteen, I’ll Be Around, I Wish and Paper Doll, that last song being their biggest hit.

Sadly, the success of these early years was darkened with the death in 1936 of John Jr. He was replaced by the brothers’ father, John Sr., a change that made very little difference to the sound of the group although it did mean that they now needed a guitarist. In came Bernard Addison, who remained for about two years, and was succeeded by Norman Brown.

The advent of the swing era brought a full blossoming of the Mills Brothers’ style, the early folksy touches disappeared and their feeling for jazz becoming unfettered.

Throughout the years, an ever-present quality of the brothers is their diction. Crystal clear, they interpret lyrics with affection and when allied with a joyous sense of swing their performances are never less than good and are often definitive. All of these qualities can be heard on collections of their performances from the period, for example, Paper Doll, Their 56 Finest, 1931-1952 (Retrospective).

The ending of the swing era was by no means the end for the Mills Brothers; indeed, the best was yet to come. In 1957, John Sr. retired and thereafter Herbert, Harry and Donald continued as a trio, touring and recording with remarkable success through succeeding decades. Among the albums of these years are Annual Report and The Board Of Directors, which the Mills Brothers made in 1967 and 1968 with Count Basie and his orchestra. Arrangements for the first of these are by Dick Hyman and among the songs recorded are Lazy River, Release Me, The Whiffenpoof Song, Tiny Bubbles, I May Be Wrong But I Think You’re Wonderful and, a nod to their accompanists, April In Paris. On the second set the charts are by Chico O’Farrill and include Gentle On My Mind, Cherry, The Glow-Worm, Sunny, I’ll Be Around, Cielito Lindo and Blue And Sentimental. Several Basie soloists can be heard, among them Snooky Young, Eddie “Lockjaw” Davis and Frank Foster, while the rhythm section urges on the already swinging singers. These outstanding albums have been regularly reissued, including appearing together on one CD (MCA), and are a notable meeting of musical minds.

Even when singing for the popular market of the day, the brothers always swung and when teamed with the similarly swinging Basie band the result was superb. All the qualities the group had demonstrated consistently through the preceding three-plus decades are evident in abundance. Indeed, the brothers are clearly invigorated by the Basie band as they swing through old and new favorites, injecting newly-sparked enthusiasm into familiar songs and revelling in songs they had rarely sung before.

In 1982 Harry died and for the first time, although only briefly, a non-family member came into the group. Seven years later, Herbert died but the early determination to keep on singing remained and Donald teamed up with his son, John III, to sing on as a duo. Donald died in 1999, bringing to an end more than 60 years of outstanding music making.

A documentary, The Mills Brothers Story, was released by Storyville Films in 2007. Mixing insightful interviews with numerous vocal performances, the film allows today’s audience to see as well as hear these remarkable singers. There are excerpts from one of the last concert performances by the trio of brothers, Donald, Herbert and Harry. Filmed in Copenhagen in 1981 and with the backing of a big band they turn in exceptional versions of You’re Nobody Till Somebody Loves You and Bye Bye Blackbird. It is altogether hugely entertaining and, indeed, inspiring.

Abekejser: Floating Through The Universe

Garry Booth - 12 March 2020
Future jazz, jazztronica, jazz pop: the young quintet Abekejeser are hard to pin down but their catchy, party-time jazz with a positive attitude is proving popular in their native...