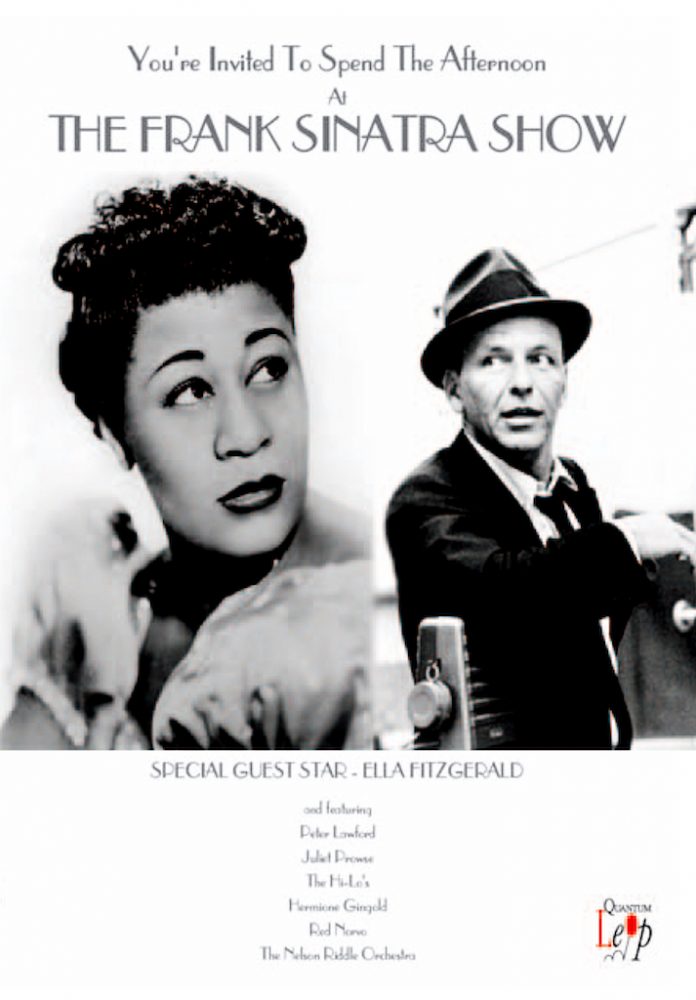 This TV show, made 10 December 1959 for the ABC Television network, was intended as an outside broadcast but fell on a rare rainy day in Palm Springs, California. Hence the retreat into what looks like, and probably was, a huge barn-like building with nothing in it but dozens of chairs.

Thus the show begins with Peter Lawford standing out in the rain, under a brolly and explaining the situation – with a few digs at Sinatra. The next scene shows a huge, bare stage with just those chairs and Sinatra sitting on one and singing, accompanied by one of his favourite orchestras, conducted by Nelson Riddle. I’m tempted to say at this point that they don’t make ’em like this anymore and, of course, they don’t. Somehow, the primitive set up and the determination to go on adds to its charm.

The show is full of A-list guests, as they call them today, with Ella Fitzgerald in good voice, scatting up a storm at one point and gently duetting with Sinatra the next. Hermione Gingold engages in sketches with Sinatra and Lawford and there are some lavish dance routines by Juliet Prowse, Sinatra’s girl friend of the time as the the two were appearing together in the movie Can Can. Then, for good measure, there is that fine male voice quartet The Hi-Lo’s, singing separately and with Frank.

One of the highlights is Sinatra singing with a small combo headed up by vibes man Red Norvo. He also has a big feature with the male voice group. Sinatra and Lawford have a comedy routine which is dated, but then so is the entire show, redeemed by the quality of the singers and the orchestra.

This is the complete show, as originally broadcast in 1959 so there are commercials by Timex, the show’s sponsor. Did you ever see a man with a bow shoot an arrow through a glass case so that the sponsor’s man could pick out a Timex watch that was waterproof and undamaged? It’s all part of the fun here.

Sinatra, Fitzgerald and the Hi-Lo’s are all on great form and the entire show reminds us how good performers could be before amateur talent nights became all the rage on TV. It’s true, they just don’t make ’em like this anymore.

Michael Tucker - 11 November 2019
I had heard about Resonance Records' sterling work in recent years to make available previously unavailable material from Montgomery, the bulk of it predating his days with first Riverside...