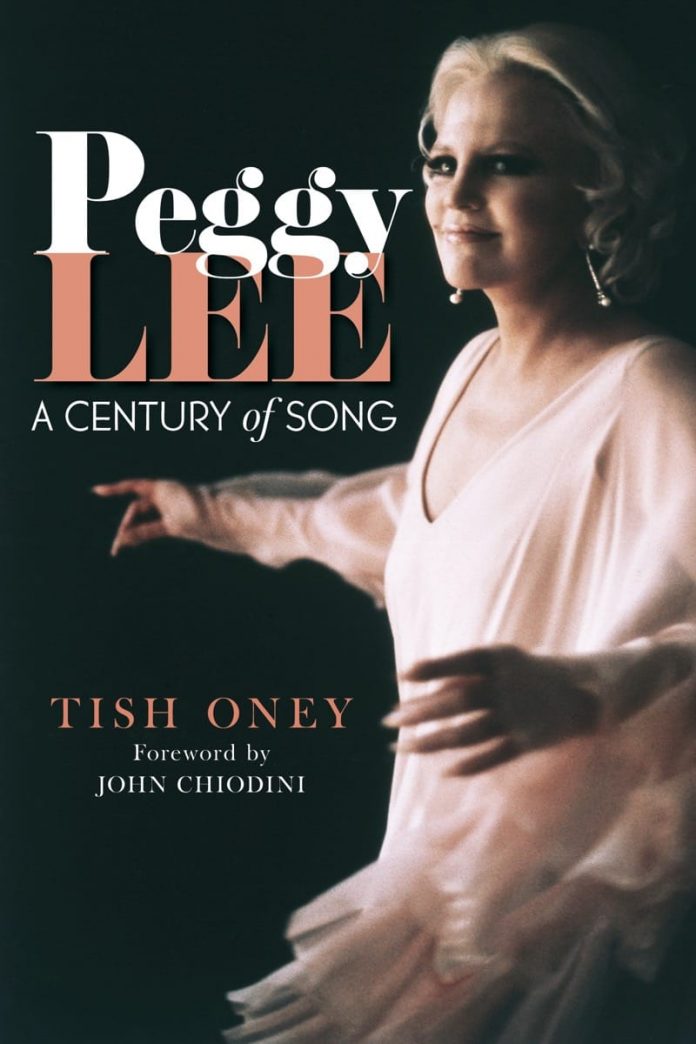 This beautiful book achieves its aim with resounding success. The title is misleading – “A Century Of Song” indicates that it is 100 years since Peggy was born, and is not, as it seems to imply, a book about the history of singing over those years.

Professor Oney seems uniquely qualified for her narrowly specified subject – an easily accessible and lucidly composed examination of Peggy Lee’s individual recordings over her career. While it is not mandatory to own all those records, it certainly helps if one does, and I imagine it must be a frustrating read for those who don’t collect them.

This is a lavish favour to us Lee collectors. The book is a smoothly produced hard back with well-indexed and comfortably spaced text. The author is a singer who has herself trodden in Miss Lee’s footsteps and has apparently undertaken an almost obsessive study of her music. As a musicologist Ms Oney has taught in several universities as a professor and artist in residence.

Because of that the book is devoted almost entirely to the music, and you won’t find any of the scandal or scurrilous stories that have fuelled the sales of some lesser volumes.

But Peggy’s personality inevitably comes through, as you’ll read in a unique analysis of her problems settling in to the Goodman band, which she had joined in August 1941. She’d been a comparatively small-time professional from the middle 30s until Benny heard her in a nightclub in Chicago. Lee’s lucky break was that Helen Ward had just left the Goodman band.

Peggy instantly came under the Goodman disciplinarian regime and it was one of the things that at first unsettled her. Another was that Ward was a soprano and in emulation Lee had to sing out of her natural range before settling into the lower, blues-impelled style that came naturally.

The Goodman band was the highest level that she could have started at and Benny was happy to work with this 21-year-old who already paid such attention to the requirements needed of a professional jazz singer. Jazz and blues are the words for Peggy, for, no matter how lush the later accompaniments, her recordings rarely strayed far from those two elements.

As one-time Lee guitarist John Chiodini says in his introduction, the detail here is amazing – there is much informed exploration of Lee’s easy success in films and before concert audiences. He and Ms Oney have recorded albums together that include much of Peggy’s material – I’m curious to hear them.

It is rare to find a work of such perfection as this book, and I can confirm that it is matched in that by the genius and natural talent of its subject.

Andy Hamilton - 04 January 2022
Theodor Adorno was an aesthete who attacked the bourgeois concept of a "feast for the ears". But I have to say – bourgeois that I am – that this...