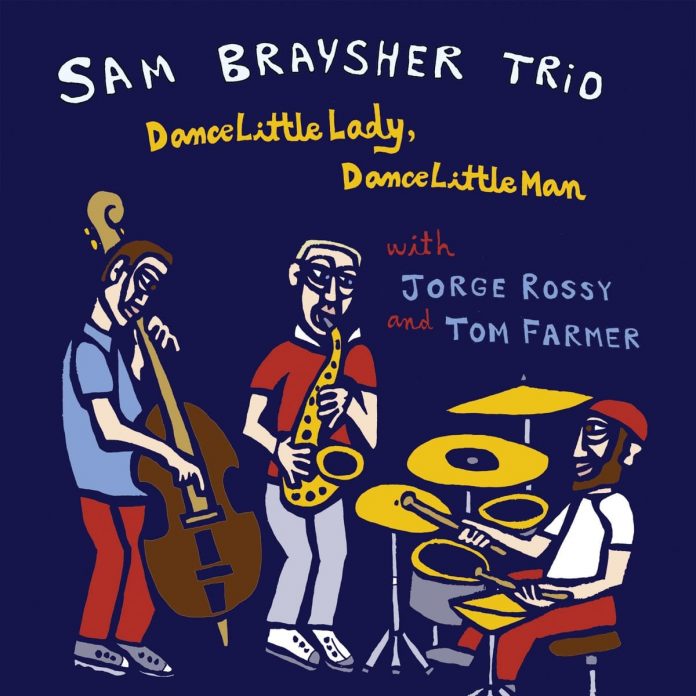 Sam Braysher’s fine debut album (Golden Earrings, Fresh Sound New Talent), a duo with pianist Michael Kanan, appeared almost as if from nowhere on its release in 2017. It was a hugely impressive set, Braysher re-examining and reinterpreting songs from the Great American Songbook plus a few jazz standards and presenting them all with a cool, modernist detachment. His playing was at a slight distance from each song, as if he was critically observing them from the outside and trying to understand them better. It certainly made the listener concentrate more.

His new trio album follows in its predecessor’s footsteps as it presents some thoughtful new takes on a diverse range of American Songbook classics, jazz standards, and a Disney song from 1998’s Mulan, not something Braysher would normally play.

As he explains, he “tried to choose an interesting selection of tunes for this set, including some that are rarely played by jazz musicians, although I hope a few of these might at least sound familiar. With the Great American Songbook material in particular, I aimed to learn it deeply by consulting the original sheet music where possible and learning the lyrics. The three of us of course have a multitude of influences between us, but when preparing these arrangements, I was vaguely thinking about the approaches to standard material of Rollins, Monk and Jamal.”

The other two of the three that distinguish this set are Empirical’s bassist Tom Farmer and famed drummer Jorge Rossy, best known for his long stint with Brad Mehldau. They’re a world-class rhythm section and the three together work magic.

Braysher himself constantly surprises, serpentine on Hoagy Carmichael’s Heart And Soul, dryly exuberant on Jobim’s One Note Samba in avoiding the usual Brazilian clichés, interrogative and driven on his own Pintxos, and contemplative on Reflection. Whatever he plays, he thinks about carefully, making each solo an excursion of great interest, never overloading sentiment or false emotion but always staying true to the song.

Rossy of course is crucial, punchy on Dexter Gordon’s For Regulars Only and hustling on Shall We Dance, the Gershwin song with lyrics that give this album its title. His vibraphone on Some Other Spring is a display of subtle beauty, his marimba on This Nearly Was Mine tentative and surprisingly woody. Farmer impresses throughout, his arco solo on This Nearly Was Mine a poignant event.

As a trio, they work perfectly, delightfully winding up the set with the brief Walking The Dog, again from the film Shall We Dance, heard when Fred Astaire and Ginger Rogers walk to and fro across the deck of a cruise liner. It’s a whimsical ending to what is in fact a serious set of reinterpretations finely delivered by this classy trio.

Discography
For Regulars Only; Heart And Soul; One Note Samba; Some Other Spring; Pintxos; Little White Lies; The Sweetest Sounds; Reflection (from Mulan); Shall We Dance; This Nearly Was Mine; Walking The Dog (44.24)
Braysher (as); Tom Farmer (b); Jorge Rossy (d, vib, mar). Begues, Spain, 14–15 May 2019.
Unit Records UTR 4951

Gordon Jack - 24 April 2019
Carla Campopiano is a flautist who absorbed the culture of the chacarera, milonga and the tango in her native Argentina. Moving to Chicago in 2015 she became influenced by the...