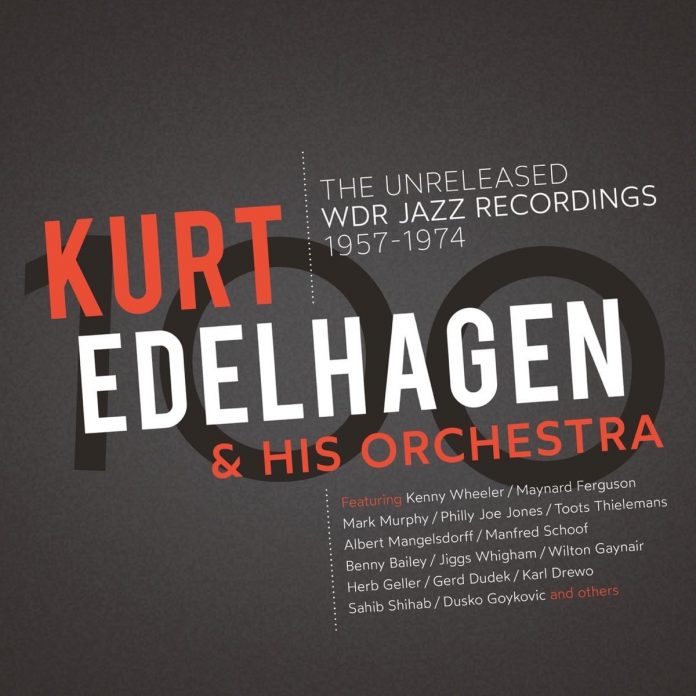 I had heard of, but never heard, the Edelhagen Orchestra. After listening to this sumptuous selection of previously unreleased cuts from the Cologne-based outfit – retrieved recently, in top-notch audio condition, from the archives of the WDR (Westdeutscher Rundfunk) – I realised just how much I had missed by not attending previously to the work of this exceptional band.

I don’t know if these three CDs represent the absolute cream of the Edelhagen Orchestra’s legacy. However, I can’t imagine the band cut too many better tracks than those to be relished here. Kurt Edelhagen (1920-1982) believed firmly in the pursuit of beauty and perfection – and boy, did he come close to both, time and time again.

As a fan of the Kenny Clarke / Francy Boland Big Band, I was interested to learn from Bernd Hoffmann’s informative sleeve-note how a large part of the historic importance of the Edelhagen enterprise lay in the fact that, as Dr Hoffmann puts it, “Leading European arrangers, such as the Dutch trumpeter Rob Pronk [who has a beautiful outing on the orchestra’s 1959 take on I Remember Clifford] or the Belgian pianist Francis Boland, cooperated with the Edelhagen band. They all played their role in shaping and reshaping this orchestra over the years. At the same time the projects with Edelhagen also played an important role in their own development. Boland for instance continued the ideas initially developed for Edelhagen in his own Kenny Clarke / Francy Boland Big Band.”

I was struck equally by the information that, in a “ Battle of the Big Bands” staged in Cologne in 1969, which featured the Edelhagen, Thad Jones / Mel Lewis and Clarke/Boland outfits, the Edelhagen Orchestra was awarded the first prize. This was the year after Derek Humble (1930-1971) – the outstanding lead altoist with first Edelhagen and then Clarke/Boland – had been seriously injured in a mugging incident in Cologne. You can hear authoritative solos from him on various tracks here, including the Adderley Brothers’ Blues For Bohemia, Nat Adderley’s Work Song and Gillespie’s Shaw ’Nuff.

The last-named has Humble leading his own quartet: these CDs cover the full Edelhagen Orchestra in its chief incarnations between 1957 and 1974 as well as a selection of small groups featuring players variously associated with it. A fair number of such players, like Humble, played with both the Edelhagen and Clarke/Boland bands: for example, Muvaffak “Maffy” Falay, Dusko Goykovich and Jimmy Woode.

In the discography below, I have had to distil the complexity of the information which accompanies Bernd Hoffmann’s sleeve-note into a bare – but I hope sufficient – indication of the many pleasures on offer, in music that ranges from the stride-piano tribute to Waller that is Fatsination (1958) to Triple Adventure and its punchy free interplay between Albert Mangelsdorff, Manfred Schoof and Ronnie Stephenson (1972), the fusion-flavoured Black Eyed (1973) and the meditative, ECM-touched Ow Dallab (1974), the last two both featuring Kenny Wheeler and Gordon Beck.

Over 20 special soloists help make this an essential purchase for anyone interested in the fast-evolving identity of European and British jazz in the 1950s, 60s and 70s, set in (if not, at times, against) the context of the continuing excellence of contemporary modern-mainstream American jazz. Sample spot-on work from, for example, Francis Coppieters (Fatsination), Herb Geller and Maffy Falay (A Cool Day), Philly Joe Jones (Mo’ Joe), Mark Murphy (McArthur Park), Shake Keane and Bora Rokovic (the in-part savagely stoked Russian Roulette, the most Clarke/Boland-like piece here), Wilton Gaynair and Jiggs Whigham (4 For Berlin, an eerily atmospheric piece) and Tubby Hayes (In The Night, composed by Hayes and featuring him extensively on flute). Totally engaging – and historically indispensable – music, this. Enjoy!

Peter Gamble - 29 December 2020
The press handout accompanying this release describes it as “a high-energy, jazz funk, fusion and soul collection”. But only one listening tells us any devotees of those particular areas...

Jazz Journal - 31 March 2019
Most of the music to be heard in the first of these albums is reasonably conventional and features excellent tenor from Yusef, in the Hawkins manner. Not such a...