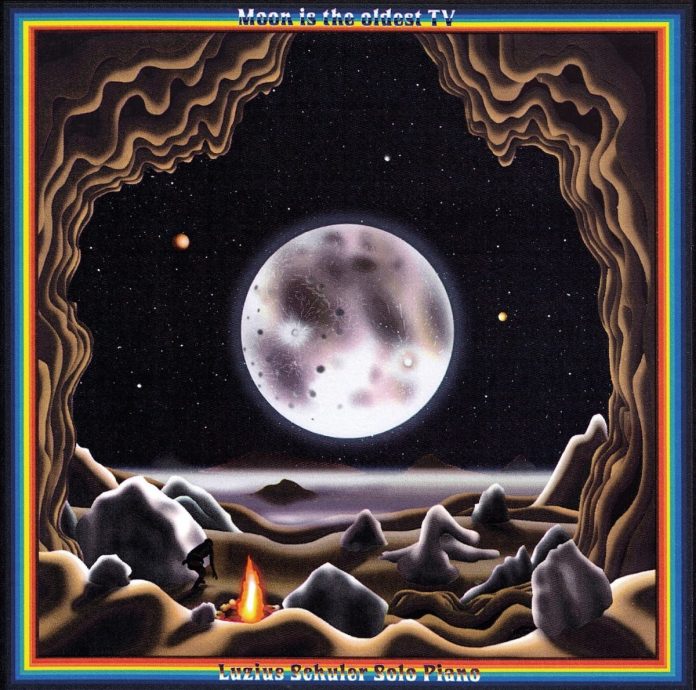 Luzius Schuler is an award-winning Swiss pianist, keyboard player, composer and producer who also works as a theatre musician and video collaborator, as well as performing with ensembles such as Esche, The Lucerne Jazz Orchestra and Marena Whitcher’s Shady Midnight Orchestra. His previous work includes three albums with guitarist Tomas Sauter (Double Life, Mind Reader and The Faraway Nearby) as well as 2017’s Calvin’s Toboggan by Woodlander, a trio he formed with trumpeter Mats Spillman and drummer Jonas Ruther. Moon Is The Oldest TV is Schuler’s solo debut album.

Recorded at Studio Suze in Biel, near Bern, and inspired by a Paris art installation of the same name by the late artist Nam June Paik, the album is experimental in nature and represents a departure from the overt jazz character of Schuler’s previous work. Its technique consists of basic composition and recording being performed on a dilapidated upright piano and then enhanced with synthetic layers and computer effects, creating an “acoustic-synthetic blend”. How much “jazz” can be found here will depend on the attitude and perception of the listener, but classical and prog influences are legion.

The set is introduced by Tango Island, whose slow, plaintive piano part is gradually joined by eerie, space-age synthesiser sounds, with a few cyber effects rounding things off. The Schwoon continues with pensive bottom-end piano before ethereal synths usher in even deeper, slower piano, establishing a sombre tone. By contrast, the brief but lofty Zamma, with its swirling synthesiser spirals, lifts the mood considerably, while Nocturno returns to a dreamier, classically inspired approach, its more structured melody occasionally punctuated by mildly discordant right-hand piano peaks and repeating trills before pausing to admit synths and programmed percussion towards the close.

Akiperu, with its sweet pairing of piano and synthesiser, the playful minor chords of Rolling, and the shorter Round Dance, all continue in the same vein as the preceding selections, with an either slow or medium-paced pairing of the two principal elements, while Gloss, by turns pensive and ponderous, hovers in a single teasing piano key before lower, doom-laden tones take over. The closing Laub keeps faith with this dominant mood while featuring some high piano flourishes over the now obligatory synthetic accompaniment.

While the artist has an outstanding jazz track record, this offering really moves away from that into minimalist classical territory, with strong nods to the prog influence. The mood of the compositions is unvaried and might have stimulated a little more interest with the inclusion of some peaks and troughs, both in terms of tempo and emotion. That said, the composition and execution are solid and will surely satisfy devotees of this kind of ambient neo-classical approach.