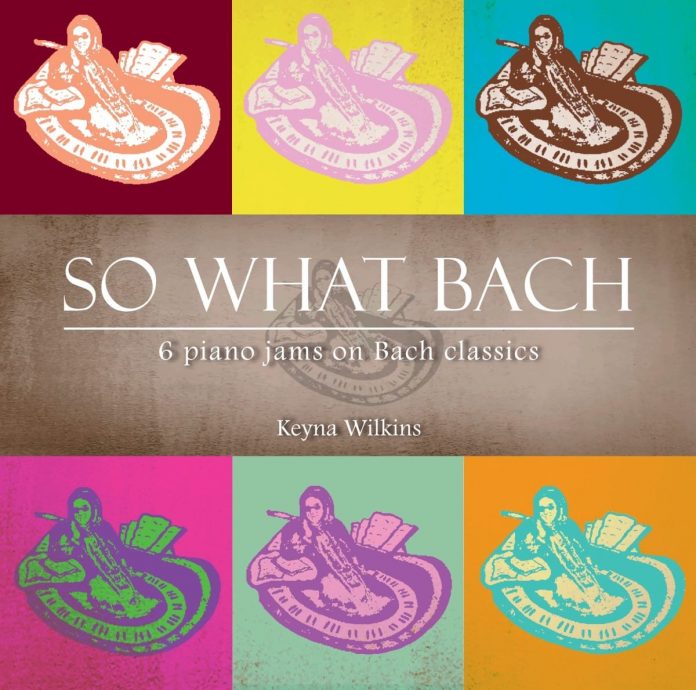 Comping jazz pianists will know the “So What” chord played by Bill Evans in the response at the head of Miles Davis’s tune of the same name. It’s a five-noter, consisting from the root up of three perfect fourths then a major third. So what? You might ask. Well, UK-Australian pianist Keyna Wilkins on her latest release uses it to re-scheme six keyboard pieces by J. S. Bach. So much of Bach’s music has the sort of drive and internal commotion typical of jazz that it’s amazing how so few have picked up on it. Perhaps, unlike Jacques Loussier and his ilk, who want to “jazz up” Bach, the recognition of similarity and, by extension, the separation of genres, are enough.

The six reinterpretations of Bach – elsewhere called “jams” or responses – are meetings of minds but are not the mock-undisciplined excursions one sometimes encounters in free form. They began as wholly improvised; now, their improvisatory and interpretative feel is notated in transcription and sometimes simplified. As an example, the tremolos which begin the So What Bach, No 4 (the Prelude In G Minor, from the Well-Tempered Clavier, BWV 861) are trilled in the original, seemingly across a narrower interval. They are also played here with more expression than one would expect in a straight reading of the Bach score. In fact, on the Bach score there would be few if any indications of how to play other than tempo. To play it like Wilkins does, there would have to be markings.

Although the So What reference seems more a symbolic gesture towards jazz than technical device, there are many appearances of quartal harmony chords: they’re in the descending right hand of bars 53 to 58 of the Prelude In D Minor with a secondary motif earlier on; in melodic fragments of bars 8 to 15 outlining quartals in the Partita In C Minor; and in the basis of some of the harmonies in sections of the Prelude In F.

Unlike Loussier, who seemed to be saying, “Wow – isn’t Bach hip!”, Wilkins dives smoothly into each piece and finds elements which she turns to her advantage. It’s a jazz version of Bach played from the inside, without Loussier’s insistence on swinging with bassist and drummer. There are less convincing passages, such as in So What Bach, No 2 (the Little Prelude in F, BWV 927). But the compensatory reinventions – I love the percussive knocks on the piano lid in So What Bach, No 3 (the Invention No 13 in A minor, BWV 784) – more than outweigh them.

Wilkins, who spent her childhood in Somerset, was a finalist in the 2018 Australian Art Music Individual Excellence Awards. She plays solo piano and flute (no flute on this album) and leads chamber groups. Her music is influenced by astronomy, “First Nations” culture, and improvisation. That’s what it says here. What it doesn’t say is that she’s also a jazz musician. But improvisation is such a feature of contemporary non-jazz music that the two categories coalesce. In the coalescence, labels dissolve. She’s busy in all kinds of music, including composition for silent movies. This is her third solo album, released at last year’s Sydney International Women’s Jazz Festival.

An enjoyable, if relatively brief, survey. Wilkins is a powerhouse player – with taste.

Frank Sinatra: In the Wee Small Hours / Songs for Swinging...

Jazz Journal - 27 January 2022
Gil Evans goes on proving the same old wonderful thing over and over again. That he is the brightest orchestral talent in jazz. That he can get more out...