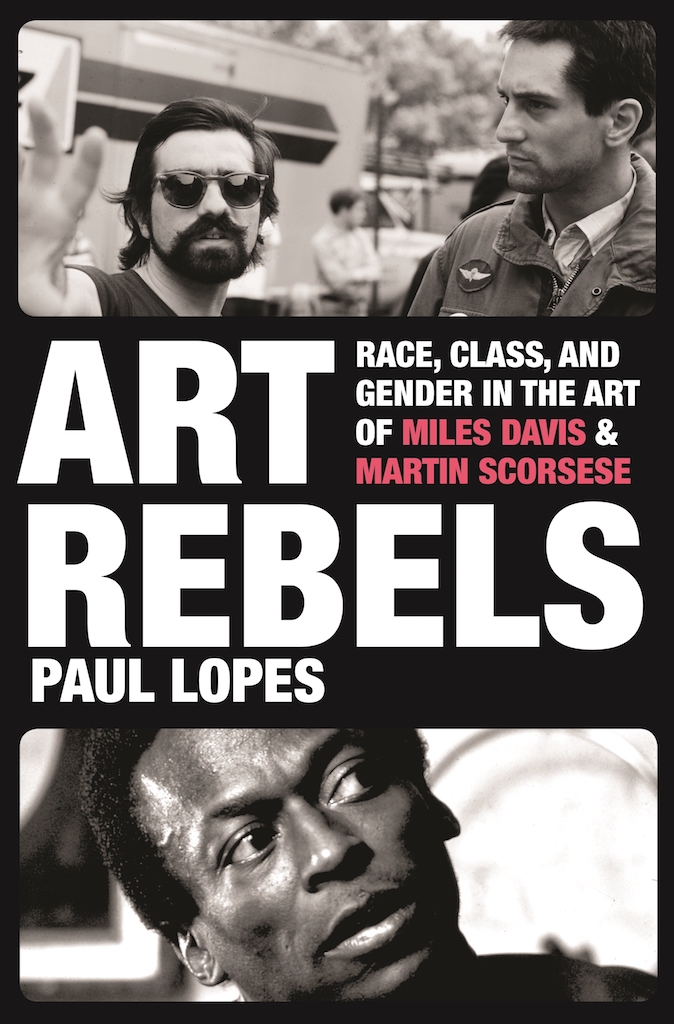 Aside from the obvious conclusion that the musician and filmmaker are singularly important creators in their fields, probably the one area where they truly rubbed shoulders is what Lopes describes as ‘hyper-masculinity’

Firstly it must be said that to get the most out of this book it helps to be an admirer of the work of both Davis and Scorsese, although some potential readers might be intrigued by the juxtaposition of two artists from different genres in the entertainment field. As the title implies, this is not simply an analysis of both men’s work but a look at how their respective backgrounds, Davis from a middle-class family, Scorsese emerging from the working-class environment of New York’s Little Italy, moulded their personalities and influenced their art.

The author Paul Lopes is a sociology professor at Colgate University, having already had one music book published, The Rise Of A Jazz Art World. His style is that of the academic, reading at times like a paper for his fellow educators. Consequently, many might find it a bit of a dry read but his research seems spot on.

In respect of Miles, much is made of his mistrust of the USA’s white establishment, singling out record-company executives and critics as being reprehensible representatives of that elite. He is constantly referred to as a “race man”, i.e., always well aware of his skin colouring being a negative in certain people’s eyes but never prepared to let this be a personal drawback in a society he in part felt at odds with. Nobody was going to mess with Miles Davis!

Lopes is critical of both his subjects in some respects and does not hesitate to use quotes from many others to illustrate how both Davis and Scorsese were often subjected to scathing criticism by their contemporaries. Wynton Marsalis and Stanley Crouch loom large in the narrative as they put down the former for his desertion of what they regarded as true jazz.

Aside from the obvious conclusion that the musician and filmmaker are singularly important creators in their fields, probably the one area where they truly rubbed shoulders is what Lopes describes as “hyper-masculinity”. Davis was a boxing devotee and is well documented here as an abuser of women. Scorsese has featured many characters in his movies, often from the Italian-American community, that epitomise ultra-masculinity.

This one is a bit of a curio for jazz followers, many of whom might be drawn to the book via the Miles Davis name on the cover.

Barry Witherden - 09 February 2021
The basic Martiny band consists of van Damme, Driessen, Jonas, Kem and Martiny himself. The other musicians were added for this sixth and latest instalment of the leader’s Grand...