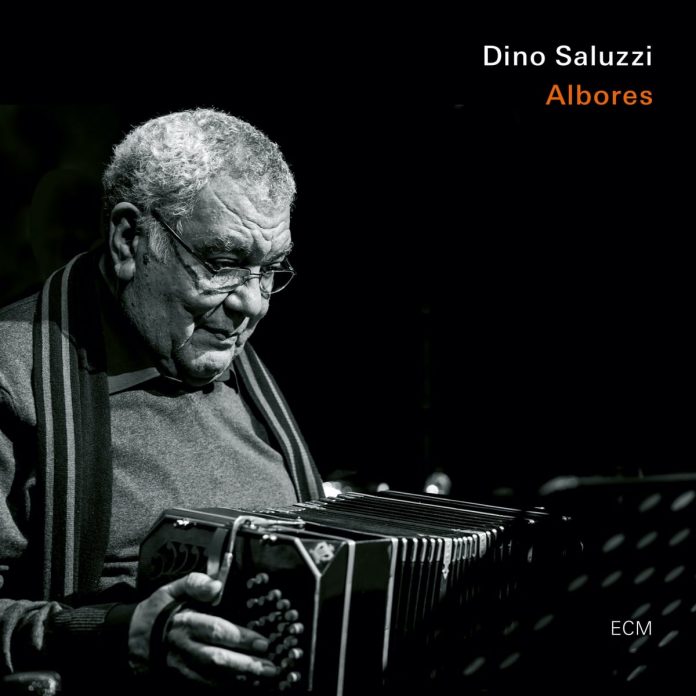 Like many, I’ve followed Saluzzi’s music since his early work on fellow Argentinian Gato Barbieri’s 1973 Chapter One: Latin America. But over the years, unfortunately, I’ve only been able to catch two of his concerts. Both took place during the November 1999 University of Brighton festival ECM: Selected Signs when Saluzzi appeared solo and (on a different evening) in a recital of the much-lauded Kultrum project with the Rosamunde String Quartet from Munich.

If the latter was an extraordinary, genre-dissolving event, the solo performance was in some ways yet more notable: an offering of bare-boned albeit subtly inflected accent and timbre, it took the audience deep into the intimate storytelling of improvisations as touched by tango as they were free from any stricture of the form. The music was as poised as it was liquid, as meditative and musing as it is was lit by moments of rhythmic joy and melodic affirmation.

It’s the bare-boned yet chromatically sophisticated Saluzzi we get here. The vocals, flutes and percussion which featured on his previous ECM solo sets Kultrum (1982) and Andina (1988) are gone, allowing the bandoneon to breathe and sing with ever deeper patience and poetry.

In today’s much troubled world how apt it is that, now in his mid-80s, Saluzzi should choose to title this synoptic set, as uplifting as it is soberly reflective, Albores (Dawn). In his wide-ranging sleeve note, Luján Baudino speaks of the track Auscencias (Absences) in terms of “The redeeming memory”. Like Bonnard, Saluzzi would seem keenly aware that those who sing are not always happy. But like Bonnard again, Saluzzi would also seem to know that those who are sad are not always without song.

Anyone who has seen Encuentros: A Film For Bandoneon And Cello – the excellent study by Norbert Wiedmer and Enrique Ros of Saluzzi in the company of cellist Anja Lechner (of the Rosamunde Quartet) – will recall the striking range of Saluzzi’s musical affinities as well as the strength of his feelings for ancestral matters both personal and regional. All such aspects of his musical personality are evident on Albores.

In 2010 Saluzzi joined Gidon Kremer (vn) and Andrei Pushkanev (vib) on the ECM release Themes From The Notebook. This interpreted and improvised upon works by the Georgian composer Giya Kancheli (1935-2019). Albores commences with Adeos Maestro Kancheli, a hushed, Andean-flecked threnody to the composer, while Don Caye – Varaciones Sobre Obra De Cayetano Saluzzi transfigures motifs from the work of Saluzzi’s late father. Further inspiration comes from the epic poetry of José Hernández, the tango clubs of Saluzzi’s native land and – in Ficción, for example – the enigmatic and refractive poetics of Borges. It all adds up to a most compelling and indispensable document of one of the truly singular musicians of our time.

Gordon Jack - 07 September 2021
The subtle blending of ensemble lines evident in Gerry Mulligan’s writing for the Miles Davis nonet and his own tentette was reflected in the CJB charts provided by his...