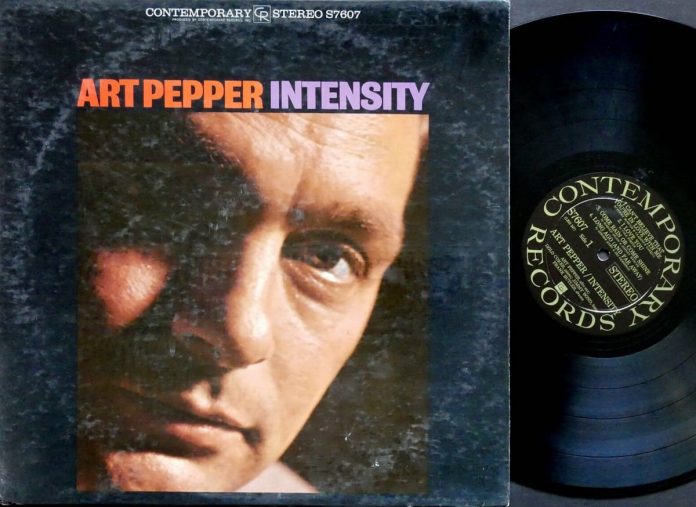 Jeremy French first reviewed this album as Contemporary LAC 553 way back in Septem­ber 1963, but the interval is so long that it will come as a new release to many en­thusiasts.

It would be difficult to think of a more appropriate title for an Art Pepper album than Intensity. For he really is Mr. Intensity himself, in fact some might argue that his playing is too intense, with not enough re­laxation. He has often been dismissed as the halfway house between Charlie Parker and Lee Konitz, and I don’t think anyone would argue that he has ever scaled the heights that these two giants have attained. Nevertheless he has been able to fashion a personal style, and was a considerable influence in his own right, mainly on the other white West Coast altoists such as Bud Shank.

This is one of Art’s best albums and I prefer it to some of his other Contemporary albums as it contains some very good tunes, some of which are not played too frequently – Gone With The Wind, I Wished On The Moon, and Long Ago And Far Away, for example.

Pepper is never content to coast along, but must always strive for perfection. Sometimes this is quite a strain, but things went pretty well on the two dates that produced this album. The rhythm section is excellent, with the little-known Dolo Coker (also on a Dexter Gordon Riverside date at around this period) excel­lent on piano, and that fine drummer Frank Butler.

Fred Grand - 25 August 2020
Small independent record labels documenting a local scene are nothing new, but there’s something particularly special about Helsinki’s We Jazz collective. A shop, festival and now a boutique record...