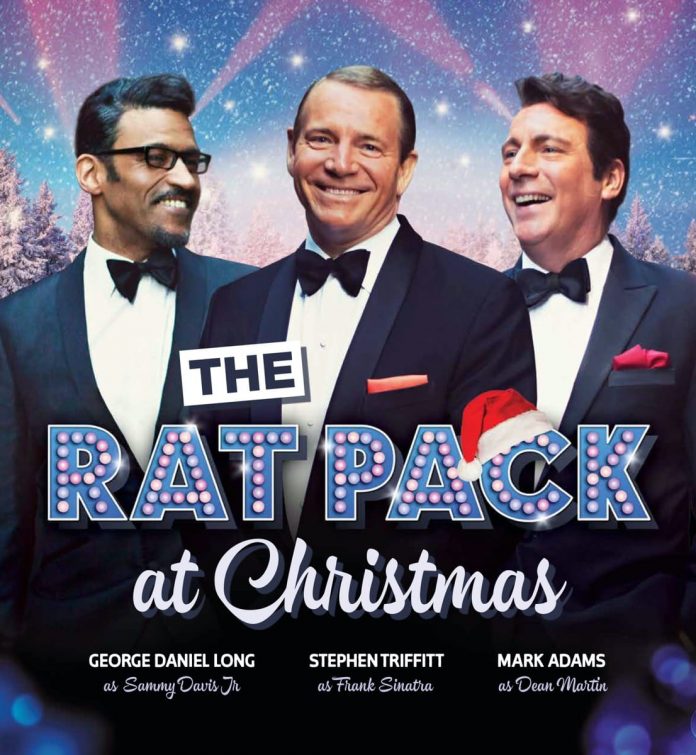 I can’t think of a better antidote to the pandemic, call it what you will or Twelfth Night, than an evening in the company of The Rat Pack. I’ll hopefully be getting close on Saturday 12 December when something like it plays two shows at Cadogan Hall, Chelsea.

In a world of tribute acts I’m referring, if it’s not paradoxical, to the real McCoy, the original Rat Pack tribute act. They are Stephen Triffitt (plays Frank Sinatra), Mark Adams (Dean Martin), and George Daniel Long (Sammy Davis Jr), who haven’t stopped working their Rat Pack act at home or abroad for the last 12 years.

The three still get a great bang out of what they do. They were already working as singles when they met. Stephen said: “I was doing cabaret in Barbados. I included My Way and someone said ‘You sound just like Sinatra and look a bit like him’, so then I started doing more and more Sinatra material.” Mark Adams was actually new to the genre and bent his professionalism to the task: “Frankly, I’d never heard of Dean Martin but when someone said I was just like him I began reading about him and researching.”

This isn’t just three guys trying to sound like three other guys; this is three guys who over several years have learned to think like and virtually become three other guys. Those who recall the real Rat Pack and were perhaps lucky enough to have seen them perform live know that it wasn’t just three guys singing in three different styles, it was far more than that, it was three guys interacting, three friends who knew each other well enough to finish each others’ sentences, well enough to send each other up. We can except a similar rapport at Cadogan Hall.

Sure, you’ll hear the tried-and-true crowd-pleasers – New York, New York, The Lady Is A Tramp, The Candy Man, but you’ll also hear repartee, good-natured joshing. Highly polished till you can see your face in it. I hope you can make it. But if you find the rope up and you live in and/or close to London don’t be too despondent – you can still catch them at the Boisdale in Belgravia until the end of December and then a further couple of nights at the Boisdale, Canary Wharf.

There’ll never be another Sinatra, Dino or Sammy. But to paraphrase another Sammy (Cahn), if this isn’t class I’ll have to do until the real thing comes along.

The trio are joined onstage by one of Dean Martin’s Golddiggers – played by acclaimed West End performer Hannah Lindsey – and the music comes from the Manhattan Swing Orchestra.

The Rat Pack, Cadogan Hall, Chelsea. Saturday, 12 December 2020, 5pm and 8pm. First show is sold out but as of 3pm on 8 December tickets remain for the 8pm house.

Roger Farbey - 22 September 2020
This is the fifth album by the collective trio Thumbscrew to have been released on the Cuneiform label. It is dedicated to the innovative avant-garde musician Anthony Braxton who...