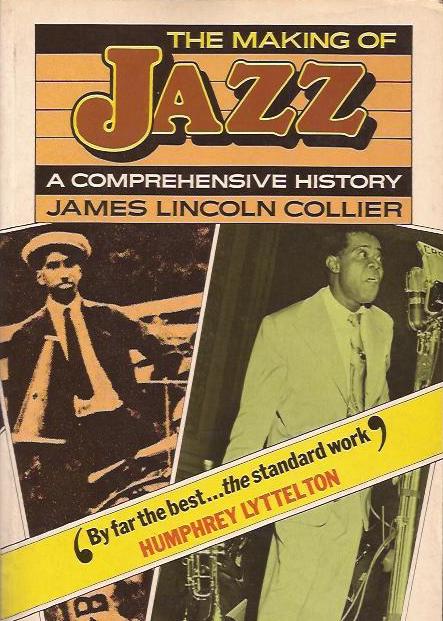 As the jazz library grows a need arises for secondary works like this, which offer little that is original yet conscientiously summarise what has gone before. Collier is honest about this, describing himself as an architect whose bricks were made by others. He admits that many of these bricks are faulty, but he failed to use all the good ones available, his bibliography including, for example, nonsense like the Harris Jazz Penguin while omitting, say, Ostransky’s Anatomy of Jazz.

Collier is brave enough to insist that “however fashionable it may be to say so, jazz is not an African music”. Yet like other one-man histories, this gets off to a bad start with the African question. A vast range of musics arose on that continent, and are here written about as if they were all the same. We need to know which musics crossed the Atlantic, what happened to them, when, and where, and how. Instead, an idealised picture of African society is given, and a contradictory one: on page 7 we read that “malice and revenge are abhorred”, on page 8 that there are “songs of insult that can be used to revenge a slight”. But the relevance of African concepts of social integration is altogether confounded by the extreme individualism of the best jazz. In an age of creeping conformity like ours this may prove, not only for musical reasons, its most valuable quality, exerting an increasing, almost illicit, appeal.

Once out of Africa Collier quickly improves, offering, for instance, a good account of how fertile New Orleans was for fresh musical developments, and why. The treatment of cool jazz is patchy, of European developments almost patronising, and, like the rest of us, he has his blindspots, failing to understand players as diverse as Teschemacher, Navarro and Bunk Johnson. Having to cover everything, he sometimes fails to grasp the full meaning of a situation – the fearful waste of talent that Waller’s career represents, for example. Yet occasionally he summarises with great conciseness, as in his description of the ambiguous tonality of Ellington’s 1940 Koko as “a superb orchestral solution to the problem of blues playing”.

Such matters as a serious underrating of Benny Carter have to be set against an acute appreciation of Billie Holiday. And there are excellent remarks on people like Teagarden, Berigan and Goodman, whom it has long been unfashionable to regard favourably. Through emphasising social rather than musical factors Collier falls into the old error of describing bop as a “revolution”, and this despite his understanding that many of the supposed “innovations” of bop were anticipated by Tatum, Hawkins and others.

He is capable of independent analysis, as of the changes of rhythmic vocabulary which led into the swing era, yet never approaches the depth of insight attained, say, by Schuller on Ellington or Hadlock on Beiderbecke.

Collier does, though, produce mature, psychologically realistic comments on the characters of Armstrong, Ellington and Parker, and on the adulation Coltrane generated, of a sort rare in jazz writing. Indeed, his cultural perspective is reasonably wide, and unlike many jazz scribes he is not afraid to let it be known that he has read books and looked at pictures. The start of the “Swing Band Boom” chapter illustrates the benefits of such knowledge.

One’s reservations about this well-written book, however generously responsive it may be to such a diversity of music, do raise the question of whether a one-man history of all jazz is any longer possible. But it has been a pleasure to read something that is intelligent and non-partisan.
Max Harrison

Steve Voce - 10 March 2019
Dave Bennett has been working on the Creole Jazz Band tracks for years and I must have a dozen CDs of his various attempts. He’s finally expressed himself satisfied...