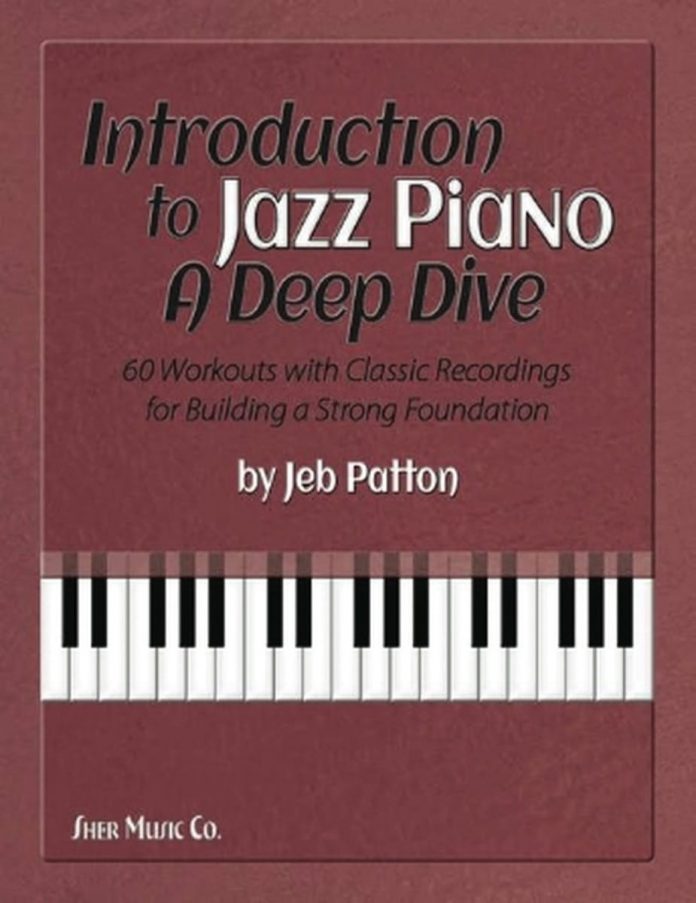 This is another excellent instructional jazz piano book from Jeb Patton. It’s aimed at both pianists and non-pianists, with the primary intention of starting from the very beginning of learning jazz piano. It also suggests that young students have three-four years of traditional piano lessons before starting to use this book. This sounds reasonable in the sense that they’d need a few years of finding their way around the instrument and would need to be able to read notation to a reasonable extent to deal with the notated examples in the book, play them, and stand a chance of attempting some transcription of solos.

Patton emphasises the importance of listening many times to a useful and fairly large cross-section of recordings from the jazz canon, in order to be able to use the book effectively, and he provides many examples with which to play, some from YouTube and others in the form of downloadable demonstration and playalong tracks on the Sher website. In the case of the YouTube examples, the piano part is still audible amongst the band – the idea being to play along with the jazz piano masters and learn by virtually being part of the band. There’s an advantage and disadvantage to doing this, as students at different stages of learning might prefer not to hear the original piano part whilst attempting to play with the recorded band (an option which the downloadable playalong tracks provide). On the other hand, initially playing along with the original piano part would offer the learner some kind of real-time support whilst attempting to play with the recorded band. Patton says that none of these examples offer count-offs (or count-ins if you prefer), since most jazz recordings do not have them and it’s a good idea not to have to depend on them. However, I’d add that it’s the norm as a jazz musician to have count-ins before playing a tune, particularly if on a pick-up gig playing standards, often with musicians who haven’t played together previously.

The early chapters take the learner through basic triad and seventh chords and the blues, to guide tones for closed three-note voicings, basic left-hand voicings, four-note voicings and chord-scales, amongst other aspects. His approach to learning voicings reminds me a little of Grigson, where the core of a jazz chord (root note, third and seventh) needs to be understood and played in the context of a chord progression, to see how “easy” it is to play a meaningful string of voicings that move in a musical jazz way from chord to chord, rather than leaping around the keyboard between chords and in the process producing a sound that is not something that other players would want as a foundation for their melodies and improvisations. The step up to producing similarly pleasing four-note chords is then merely a case of adding an additional chord note (often the 9th or 13th) within the existing three-note hand positions. Patton also addresses the highly important rhythmic aspect to jazz chord-playing, with examples – something which is sometimes lacking in other books of its type.

The later chapters address more advanced chord-voicing issues, such as open position chords, spread voicings, drop-2 voicings, and fourth-like (quartal) voicings, so overall in the process of using the book, the learner should be able to become equipped with the all-important skills of putting together two-handed chord voicings with which to accompany others and to harmonise melodies, and various left-hand rootless voicings and shell chords so as to support their own right-hand improvised lines.

Then the book moves onto a set of the most useful scales to practice, with which to improvise in the right-hand, but more importantly Patton highlights the issue of how to utilise these scales in a musical way – no one in jazz wants to listen to scales running up and down incessantly, without any larger intervals between notes or changes of direction within a scale, which are the things that make a line sound melodic, in terms of pitch.

Speaking of which, Patton then goes on to talk about melodic building blocks for soloing using five-note scale fragments, employing a technique not unlike that of, say, Sudnow in his Ways Of The Hand or Nordal in his Wisdom Of The Hand. Generally speaking they present the idea that a player is most likely to be able to generate melodic phrases in the real-time process of improvisation, by “grabbing” a set of notes in the right-hand (notes from a scale that fall easily under the fingers of the hand, without having to change hand-position or use thumb-under complete-scale techniques). Patton also highlights the usefulness of arpeggio-patterns as an additional means of achieving melody. He also looks at bebop scales and triplets from the rhythmic aspect.

The book closes with some useful two-handed workouts to test the playing technique – on major, tonic minor, harmonic minor, diminished scale and whole tone scale, all in tenths (playing different notes simultaneously in the right and left hands, preferably at a reasonable speed, outside the octave), which is a bit of a challenge even to relatively experienced jazz pianists. It also provides an introduction to transcribing (notating what you hear when other pianists play) and perhaps more importantly assimilating solos (taking elements from a solo and developing them into your own language), so the book has clearly moved away from the basics by its end.

I like Patton’s approach – generally speaking he provides what the learner actually needs most to begin with, and towards an intermediate level, and saves the rest for later, should they get that far.

Leon Nock - 19 December 2021
This was a standout album from the moment it was conceived in the mind of Norman Granz, taking on extra lustre at each subsequent stage, rehearsal, recording, so that...