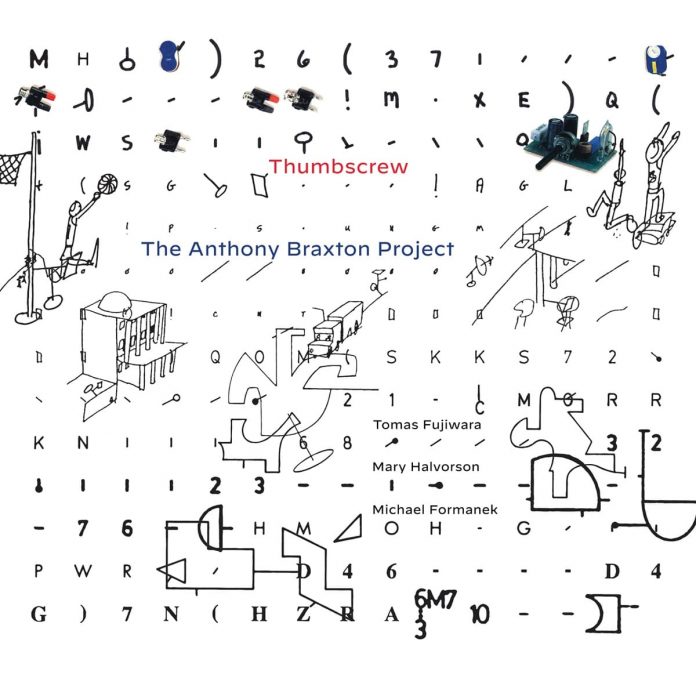 This is the fifth album by the collective trio Thumbscrew to have been released on the Cuneiform label. It is dedicated to the innovative avant-garde musician Anthony Braxton who celebrated his 75th birthday on 4 June 2020.

The music on the album was developed, recorded and premiered during an artist residency at City Of Asylum, Pittsburgh. The 11 Braxton compositions are predominantly ones that have never been previously recorded. As with many of Braxton’s pieces they are numerically titled and the album cover and reverse feature typical Braxtonian hieroglyphics and pictures.

Braxton’s sheer recorded output alone, in excess of 100 albums, puts him in a different category to most jazz musicians. He is also rightly revered for the excellence of his compositions and iconoclastic playing exemplified on records such as the solo album For Alto (Delmark, 1969), Eugene (Black Saint, 1989) with The Northwest Creative Orchestra and his essential contributions to outstanding works such as Dave Holland’s Conference Of The Birds (ECM, 1972).

The tracks on this album were gleaned from scores held at The Tri-Centric Foundation Archive located in New Haven, Connecticut which harbours a unique collection of Braxton’s original scores, writings, audio, video recordings, and concert ephemera. As Thumbscrew percussionist Tomas Fujiwara said of the trio rummaging through these rare archives, “We were like kids in a candy store – a feeling that there were unlimited options that would all work for us and be a joy to explore.”

Whilst a biology undergraduate at Wesleyan University guitarist Mary Halvorson met Braxton and studied with him, deeming that period in her life pivotal in changing direction to become one of the most intriguing musicians of the 21st century. As Halvorson herself remarks of her mentor “I consider him one of the main catalysts for me deciding to become a musician. Studying with Anthony, learning his musical systems and playing music with him remains one of the most important and inspiring musical experiences of my life.” Whilst both bassist Michael Formanek and percussionist Fujiwara make extraordinary contributions to the album, particularly the latter’s fleet-footed vibes work, it is Halvorson who is the electromagnetic attraction here. Just when you thought everything that could be said on the guitar had been said, her truly innovative technique proves this untrue.

Amongst the 11 wholly gripping tunes, the album is also punctuated by three solo tracks featuring solo guitar, drums and bass respectively. Halvorson’s outing is augmented by ever-mesmeric looping lines, Fujiwara concentrates on beater-struck toms and cymbals whilst Formanek delivers a pizzicato bass tour de force replete with resonant glissandi. The handbrake-turn tempo changes frequently occurring within all the album’s trio pieces decisively add to their piquancy. Composition No. 274 clearly demonstrates why Halvorson is one of the most exciting guitarists around. It’s not merely the speed and fluency of her playing but her crystalline electric archtop tone fused within these qualities. There’s no lack of whimsy too with, for example, the bouncy bop of the closer Composition No. 79.