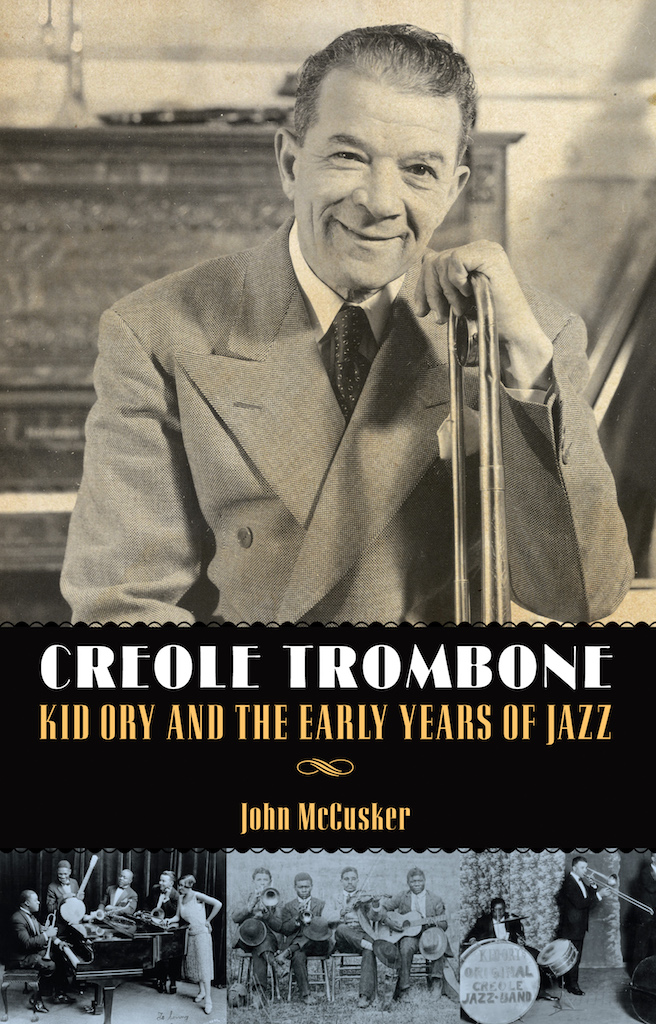 This book, which first appeared in 2012, is the product of 15 years of research which spanned the death of the author’s wife and the flooding of his New Orleans home as an effect of Hurricane Katrina. That he continued with his research and writing after these traumatic events is a testimony of his dedication to his subject and the result is indeed a labour of love.

The book’s value lies in the details of Ory’s family background and his life until the end of the 1920s when his recording activities in Chicago finished and he was soon to move to the West Coast. Around 180 pages are devoted to this first segment of Ory’s life with only five pages sketching in the following four decades before his death. This “epilogue” is followed by another 60 pages including a brief story from Ory’s autobiographical notes, a “selected discography”, the sheet music of some unpublished Ory compositions, 30 pages of notes to the 10 chapters, and an index.

The author makes no claims to stature as a critic and does not, for example, defend Ory against Hodeir’s negative comments. Instead he acts primarily as a historian, starting by tracing Ory’s lineage back to a Frenchman who crossed the Atlantic in the 18th century. (Surprisingly the French language survived to the extent that it was Kid Ory’s first tongue in his childhood.)

Ory’s family, the nature of their life and the society they moved in are delineated in remarkable detail, partly because Ory’s daughter, Babette, provided the author with her father’s autobiographical writings. Incomplete and chronologically confusing as they were they provided a framework for the author’s own research which produced not only a picture of Ory’s early life but a broader impression of New Orleans in those early years, complementing Danny Barker’s reminiscences.

To anyone interested in Ory specifically or the early New Orleans scene in general I would recommend this book very strongly. And I failed to mention above the ten unnumbered pages of photographs which begin with a nineteenth century portrait of Ory’s father and end with Ory playing in a New Orleans parade at the age of 84, two years before his death.

Dave Jones - 09 November 2020
This follow-up to the excellent Volumes 1 and 2 of John Beasley Presents: Monk’estra tells us that this time Monk’estra (with broadly speaking the same line-up as Vols. 1...