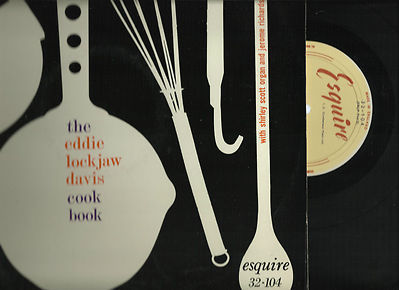 Bill Basie told me not too long ago that Mr. “Lockjaw” Davis was un­doubtedly the greatest “gutbucket” tenor playing anywhere today; and I have no doubt that Basie was right! This is great stuff, full-blooded, with little sophistication, but filled with the most unbridled excitement.

“Lockjaw” really punches it out, being helped to a tremendous extent by Miss Scott, a fine rhythmic organ player. Using short, sharp phrases that get the maximum re­sponse from her instrument, she really swings and matches Eddie both in volume and invention.

Richardson’s flute sounds a trifle effete in this com­pany, but he is vigorous plaver never­theless and by no means dedicated to the cool school. His tenor playing is excellent as he proves in the chase choruses on “Three Deuces”.

With the exception of “Beautiful”, on which “Lockjaw” rhapsodises with the fluency of Hawk at his best, the rest are blues, slow, medium and fast. My favourite, perhaps because it is the shortest, is “The Chef”, which Davis and company take out of the oven at just the right moment.

Jazz Journal - 27 September 2020
This is a record by one of the greatest hot trumpeters in jazz; he plays his horn over a pounding rock beat which establishes a con­sistently feverish atmosphere, and...