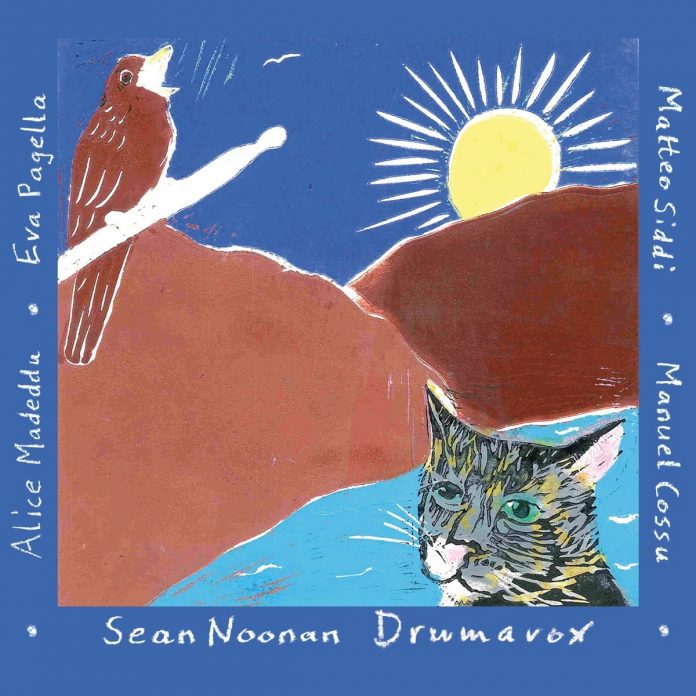 Noonan prefers to call himself a “rhythmic storyteller” rather than drummer or percussionist, and he has frequently in the past narrated the back-stories of compositions while playing. Singing drummers may conjure up images of the Dave Clark Five (though only in the very old), but there’s a pretty honourable tradition that stretches all the way from Levon Helm to Han Bennink and Ken Hyder. However, this is probably the first time that a drummer/vocalist has gone out with an operatic vocal quartet … from Sardinia.

Noonan had been working on the rock opera Zappanation when he encountered tenor Matteo Siddi, a fearless and often subversive experimenter who has won fame for his impressions of everyone from Michael Jackson to Jesus. Joined by three others who share his hyper-eclectic approach, Siddi is the de facto lead in the quartet that accompanies Noonan here in some wildly thrashy reinterpretations of material from his catalogue, which draws on umpteen traditions and styles.

The Zappa connection holds in that the singing is often wild falsetto, notably on the opening As The World Spins or a faux-artless folksy yell on Silkie From The Sea, which seems to have a Scots/Irish provenance, which is presumably his family background. The most remarkable cut, though, is Don Knott’s, which fugues, almost literally, on the few phonetic possibilities of the title, while Noonan maintains a tight, supertight cymbal riff underneath.

Over the span, this is quite tiring music as a purely aural experience. It somehow needs a video or a concert package to bring it fully to life, but track by track, it’s insanely good and a fascinating exploration of the relationship between music and storytelling, a nexus that is far more thoroughly broken and lost than the connection between music and dance, which just about clings on. Noonan’s an important figure, and if the Zappa reference puts anyone off – as it inevitably will – Noonan’s not an ironist or a satirist. He’s working in a very ancient tradition and bringing it back to life.

Playground is the Italian musician Paolo Russo’s 17th album, and showcases his skills as pianist, bandoneonist and composer. It presents a whimsical journey inspired...

"Why do you marry all these beautiful women?" the lady interviewer said to Artie Shaw, veteran of eight such marriages. "Do you think I should...

Continued from last month...Among the many who have validated Pete's very personal sound is Warne Marsh. At their first meeting on a rehearsal of...

If any of you have ever asked the meaning of the word 'swing', here is the complete answer. Stuff gets off the ground on...

Sean Noonan: Drumavox"It somehow needs a video or a concert package to bring it fully to life, but track by track, it’s insanely good"
Advertisement