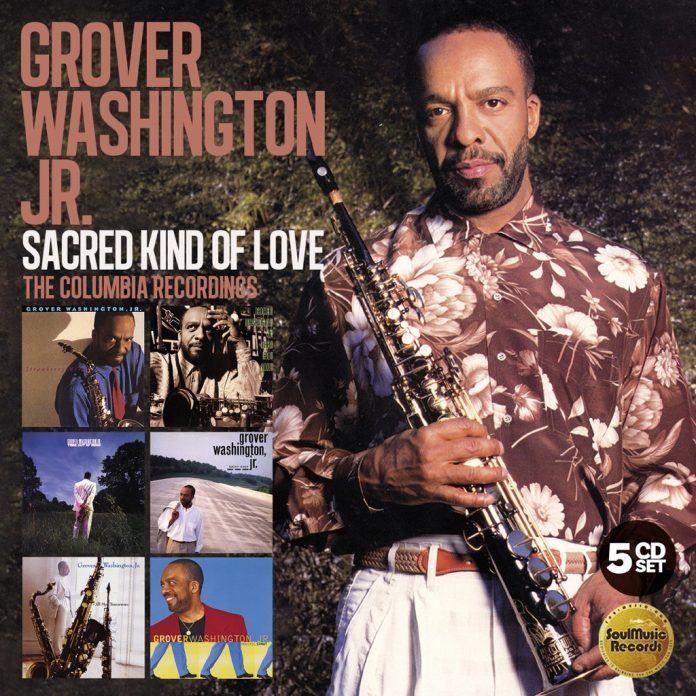 This is a five-disc box set of six albums, spanning nine years (1987-1996) by saxophonist Grover Washington Jr, who is widely recognised as an influential pioneer in the fusion of jazz, soul, R&B and pop. Washington signed for Columbia in 1986 after gaining a reputation in jazz-funk thanks to albums on the Kudu label such as Mister Magic, Feels So Good and A Secret Place. However, it was the release of the 1980 Elektra classic, Winelight, that really catapulted Washington to fame. This album contained the huge hit The Two of Us featuring Bill Withers. It is also said to have marked a “state change” in the crossover appeal of the phenomenon that became known as “smooth jazz”.

Just the mention of those two words may cause some JJ readers to shudder, but it shouldn’t. Washington was a quality musician who in turn attracted quality musicians to play with him. Two of the albums in this compilation Then And Now (with guest players Herbie Hancock, Ron Carter and Grady Tate) and All My Tomorrows (featuring Eddie Henderson, Bobby Watson, Hank Jones, Robin Eubanks and Billy Hart) were both critically acclaimed by audiences and reviewers and reaffirmed Washington as a “straight ahead” jazz musician of some pedigree. But there is no doubt that Washington purposefully crossed musical boundaries and his music is the richer for it, especially when he combined his unique talent with others.

Various guest vocal performances by Jean Carne (The Look Of Love, Keep In Touch), Phyllis Hyman (Sacred Kind Of Love), B.B. King (Caught A Touch Of Your Love), Nancy Wilson (Your Love), Lalah Hathaway (Love Like This), Levis Stubbs (’Till You Return To Me) are among the many highlights of Washington’s time at Columbia. The collection features bonus tracks as well as some articulate liner notes from Charles Waring.

This may not be music for the jazz purist, but great music it is. I enjoyed this box set enormously and it reminded me how good a musician Washington really was. But to my mind, instrumentals were not Washingtons’s only strength. When he combined his talents with others, such as Bill Withers, the results were very often even better. The fact that he died aged 56 was a great loss to the music world. Highly recommended.

Discography
CD1: [Strawberry Moon] Strawberry Moon; The Look Of Love; Shivaree Ride; Caught A Touch of Your Love; Maddie’s Blues; I Will Be Here For You; Monte Carlo Nights; Keep In Touch; Summer Nights; [Then And Now] Blues For DP; Just Enough; French Connections; Something Borrowed, Something Blue; Lullaby For Shana Bly (75.56)
CD2: Stolen Moments; In A Sentimental Mood; Stella By Starlight; [Time Out Of Mind] Jamaica; Gramercy Park; Sacred Kind Of Love; Brand New Age; Fly Away; Don’t Take Your Love From Me; Time Out Of Mind; Split Second (Act II. The Bar Scene); Nice-N-Easy; Unspoken Love; Protect The Dream (74.06)
CD3: [Next Exit] Take Five (Another Five); Your Love; Only For You (Siempre Para D’Sera); Green Street; Next Exit; I Miss Home; Love Like This; Summer Chill; Till You Return To Me; Get On Up; Check Out Grover; [All My Tomorrows] E Presciso Perdoar; When I Fall In Love; I’m Glad There Is You; Happenstance (75.22)
CD4: All My Tomorrows, Nature Boy; Please Send Me Someone To Love; Overjoyed; Flamingo; For Heaven’s Sake; Estate (In Summer); Every Day A Little Death (49.48)
CD5: [Soulful Street] Soulful Strut; Can You Stop The Rain; Play That Groove To Me; Bordertown; I Can Count The Times; Village Groove; Headman’s Haunt; Poacher Man; Mystical Force; Uptown; Heat Index; The Night Fantastic (55.57)
Washington Jr. (s); No details supplied regarding other instrumentalists. Guest vocalists include Jean Carne, Phyllis Hyman, B.B. King, Nancy Wilson, Lalah Hathaway and Levi Stubbs.
SoulMusic Records SMCR5186BX

Matthew Wright - 26 August 2021
This is a new band to me, although it’s apparently been on the European circuit for 30 years. As the title suggests, it is a tribute to the swing...