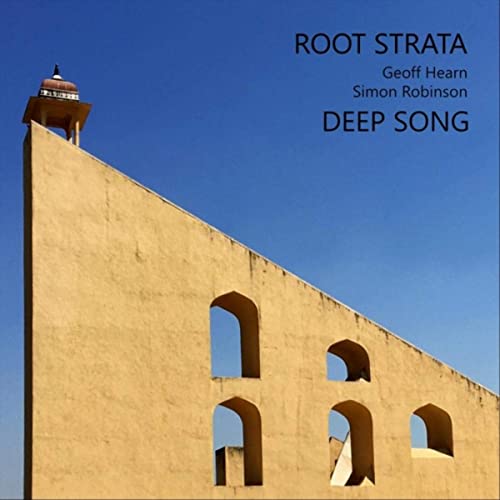 In 1943 the Scottish painter and jazz musician Alan Davie (1920 – 2014) wrote in his notebook that “The great works are made from life itself, stripped of superficiality and impurity; they are pure soul and joy, delicately like the delicateness of line across immense mountains.” Decades on, here is one such work.

This is the suite of original pieces I highlighted in Geoff Hearn: blues in space, when I called it some of the best post-CODONA music I’d heard: for initial justification of such a characterisation, sample the poised yet flowing invocations that are Spirit Dance and The Storyteller. Deep Song is the second release from the Root Strata duo of Hearn and pianist and keyboardist Simon Robinson, following The Secret Of Root Strata of 2011.

Like that album, Deep Song – in equal measure reflective and penetrating, jazz-caressed and folk-limned – was produced by Robinson. He has both a beautiful touch and an exquisite, often entrancing sense of dynamics, exploiting a telling range of software instrumental sounds (including kora, bass and percussion) in a rich yet astutely tempered blend of modally sprung, diversely energising rhythmic figures and atmospheric texture.

Hearn sets his potent tenor and baritone aside to foreground concert C and alto flutes, shakuhachi and Native American flutes: all are played with a poetically compelling blend of pitch-bending economy and rhythmic subtlety. Soprano sax features on the spare and deeply “breathing” meditation that is the title track and the achingly tender Dream Weaver.

The last is a Hearn original, not the Charles Lloyd classic from the 1966 recording with Keith Jarrett, Cecil McBee and Jack DeJohnette. But Lloyd has long been one of Hearn’s chief elective affinities, together with Don Cherry and Yusef Lateef. If you’re familiar with the work of those indefatigable explorers of the human spirit, you’ll have some idea of what to expect from this music.

Don Cherry called the work of his latter years “primal music”. Think also here of the Native American flautist R Carlos Nakai or the Honkyoku shakuhachi of the travelling Zen masters of old (hear Empty Sky, which – together with the similarly rubato Winter Dream – is some of the most soul-piercing music I’ve heard) and you’ll come closer still to the transformative blend of unforced jazz literacy and world-embracing poetics which sparks the “pure soul and joy” that is Deep Song.

Peter Gamble - 11 October 2021
The original UK vinyl release of this album on the Verve label (VLP 9125) was in 1966, sporting a compilation of tracks taken from the substantial discography O'Day had...