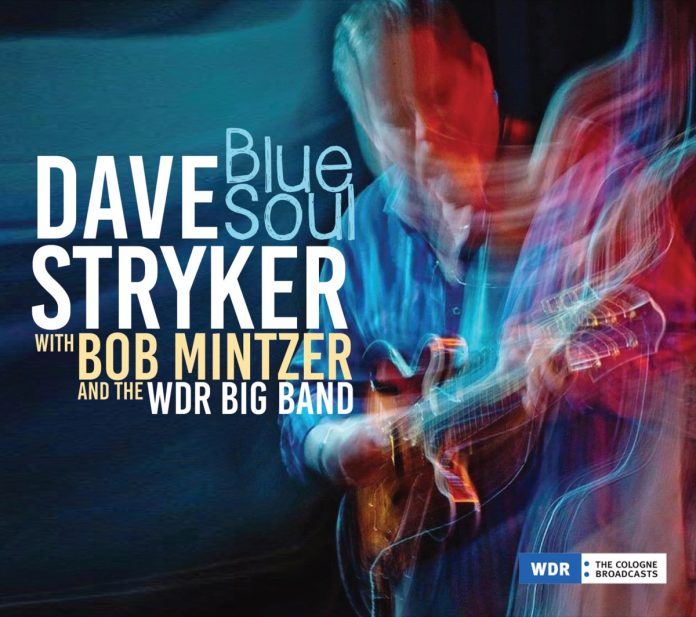 Dave Stryker is a 62-year-old American jazz guitarist who has recorded numerous albums as leader as well as being a sideman to quite a few big names. Stryker grew up in Omaha, Nebraska but moved to Los Angeles in 1978 where he later met organist Jack McDuff. After moving to New York, he toured with McDuff in 1984-5, then spent nearly a decade with saxophonist Stanley Turrentine.

When reviewing his last album, Eight Track III, I commented that his music may not be to everyone’s taste and some may think it a little “cruise ship” or “cabaret”. But it is never less than foot-tapping fun, with creative interpretations and improvisations. His choices can be eclectic but never boring. Blue Soul is a collaboration between Stryker and saxophonist arranger Bob Mintzer and his WDR Big Band; this, in effect, is Stryker being turbo-charged.

Again, the track choices are varied – ranging from Marvin Gaye’s Trouble Man and What’s Going On through to Jimmy Webb’s Wichita Lineman. There are a couple of Stryker originals – Shadowboxing and Came To Believe; and Bob Mintzer has contributed Aha as well as some fine tenor-saxophone performances. The album finishes with a storming rendition of the Stanley Turrentine classic, Stan’s Shuffle.

You expect Stryker’s music to sound a bit retro. But the inclusion of Bob Mintzer’s Big Band seems to create a strange juxtaposition between the 1950s and the modern period. Nevertheless, Mintzer’s arrangements are perfect for the Shaft-like feel to Trouble Man. I was less convinced by the uptempo feel to What’s Going On, only because I love the original too much. Blue Strut is about as big band as you get, whilst Prince’s When Doves Cry doesn’t bear much resemblance to the original. Shadowboxing is a feisty little number you could do a great quick step to. Wichita Lineman is the stand-out track for me, showing just what a fine guitarist Stryker is. Similarly, Stryker’s time spent with Turrentine is evident in the way he rips into Stan’s Shuffle.

If you like jazz guitar with a retro feel and/or are a fan of big band, or you just want to have fun, this album is certainly worth checking out.

John White - 18 February 2021
Ageing Frankophiles will already own (and repeatedly play) some of the 16 albums represented in this excellent anthology. They are All The Way, This Is Sinatra!, This Is Sinatra...